Easley has been hosting the Big League World Series for several years. The Upper South Carolina State Fair is located about 2 miles (3 km) east of Easley. It is held annually in early September. 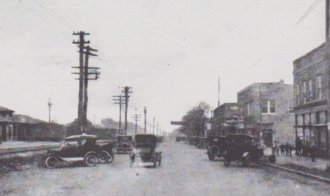 Col. Robert Elliott Holcombe became a co-founder of the town by starting off as a farmer and timber mill owner in the area. His farming ventures enabled him to establish the storeroom in 1845 as the first business in the area. The namesake of the town was William King Easley. Easley was born in Pickens County, South Carolina in 1825. Easley and four others from Greenville represented the Greenville area in the South Carolina Secession Convention. When the American Civil War erupted, Easley raised a company of cavalry from Greenville and Pickens counties. During the war Easley served as a major in the Confederate Army.

After the civil war Easley became a local attorney and persuaded the Atlanta and Charlotte Air Line Railway to be established through Pickensville by raising $100,000 to invest in the railroad. Holcombe was considered to be the first citizen of Easley, building the first dwelling and train depot in the town from his family's lumber mill. Holcombe became the first mayor of the town and was also the first agent of the train depot. The town of Easley was chartered in 1873. At the time, the consensus was that it should be named Holcombe or Holcombetown, but Col. Holcombe said that he didn't think Holcombe was a very attractive name and that Easley sounded better. The Pickensville Post Office became Easley Post Office in 1875. The railroad transformed Easley into an industrious and thriving textile town. The Easley Textile Company, later known as Swirl Inc., came to Easley in 1953. The construction of U.S. Route 123 helped establish retail and new business to Easley. On April 25, 1951 a department store was on fire threatening many buildings in downtown Easley but the quick response of the fire department extinguished the fire.

Larry Bagwell is the elected mayor.

There were 7,227 households out of which 30.6% had children under the age of 18 living with them, 53.9% were married couples living together, 12.3% had a female householder with no husband present, and 30.0% were non-families. 25.7% of all households were made up of individuals and 11.0% had someone living alone who was 65 years of age or older. The average household size was 2.43 and the average family size was 2.90.

Battery B, 2nd Battalion, 263rd Army Air Missile Defense Command, is based at the Easley National Guard Armory in Easley.

All content from Kiddle encyclopedia articles (including the article images and facts) can be freely used under Attribution-ShareAlike license, unless stated otherwise. Cite this article:
Easley, South Carolina Facts for Kids. Kiddle Encyclopedia.