Lake Jocassee (/dʒəˈkæsi/, /dʒoʊˈkæsi/) is a 7,500-acre (30 km2), 300-foot (91 m) deep reservoir located in northwest South Carolina. It was created in 1973 by the state in partnership with Duke Power. The lake is known for the clean and cold Appalachian mountain rivers that flow into it, keeping its waters cool and clear year-round. The Jocassee Dam, which forms the lake, is 385 feet (117 m) high and 1,750 feet (530 m) long. The lake is within Devils Fork State Park.

Although most manmade structures were demolished before the lake was flooded, divers recently discovered the remains of a lodge that was left intact; it is now below 300 feet of water. Mount Carmel Baptist Church Cemetery was a setting for a scene in the film Deliverance (1972), starring Burt Reynolds and Jon Voight, produced before the lake was flooded. The site is now covered by 130 feet of lake water. 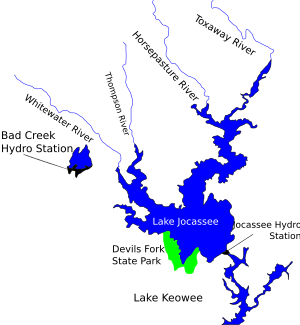 Lake Jocassee and the surrounding bodies of water.

A confluence of four rivers supplies Lake Jocassee's water. The farthest west of the rivers, the Whitewater River, flows southeast until it meets the northwest corner of Lake Jocassee. The Thompson River flows due south until it too reaches the lake in the northwest corner. The Horsepasture River feeds the lake from the northeast corner, along with the Toxaway River, which is directly east of the Horsepasture River.

The Jocassee Hydro Station, located in the southeast corner of Lake Jocassee, separates it from the beginning of Lake Keowee, which has overtaken the underlying Keowee River. On the southern border of Lake Keowee is the city of Seneca, developed prior to the lake. The old mill town of Newry, constructed on the banks of the Keowee River, is now along the lake border. Unlike Lake Jocassee, Lake Keowee has become densely settled. As most of the land adjacent to Lake Jocassee is owned by Duke Power and the State of South Carolina, they have kept it undeveloped. 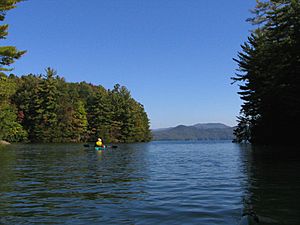 A rare wildflower, the Oconee Bell (Shortia galacifolia), native to only a few counties in the Blue Ridge area, was discovered in the area in 1788 by French botanist André Michaux. The flooding of a large area by Lake Jocassee is said to have caused the destruction of the heart of the species' range. More recently, biologists have documented the occurrence of a number of rare, threatened and endangered species in this area. The Eastatoee Gorge Heritage Preserve was transferred from Duke Power Company to the South Carolina Department of Natural Resources in 1979 due to the extremely diverse flora occurring there.

Wildlife management efforts in the Jocassee Gorges area began as early as the 1930s when the Chief Game Warden managed the stocking of trout from the Cleveland State Fish Hatchery, Table Rock State Hatchery, and the Walhalla National Fish Hatchery. The state began to investigate and improve fish populations in the area. People hiking, hunting, fishing, or nature watching benefit from the fish stocking and law enforcement of the Game Management Program (now WMA). 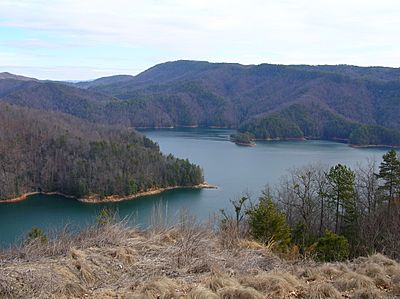 Lake Jocassee from the Bad Creek entrance to the lake.

The name Jocassee comes from a Cherokee legend about a maiden of that name. An Oconee tribe, the "Brown Vipers" led by Chief Attakulla, inhabited the west side of the Whitewater River, while a rival tribe, "The Green Birds", lived on the east. Legend says that a young Green Bird warrior, Nagoochee, was not afraid to enter Brown Viper hunting grounds. On one occasion, he fell and broke his leg and was convinced he was going to die. Then he heard Jocassee, Attakulla's daughter, who brought him back to her father's lodge and nursed him back to health. Jocassee eventually fell in love with him. In a later battle, Cheochee, Jocassee's brother, killed the Green Bird warrior and brought Nagoochee's head back on his belt. Legend has it that Jocassee went into the water and did not sink but walked across the water to meet the ghost of Nagoochee. The name Jocassee means "Place of the Lost One."

The Jocassee Gorges area was once part of the Cherokee Nation homelands. It now lies 300 feet (91 m) beneath the surface of the lake, near the Toxaway River. Nearby Keowee Town was a major hub in the Cherokee Path that connected Cherokee towns and villages throughout the area. Early 18th-century traders worked with the Cherokee, and delivered as many as 200,000 deerskins annually to Charleston, South Carolina. They supplied the local Cherokee in trade with European firearms, ammunition, metal tools, and clothing.

However, mounting discord between the English and Cherokee led to war in 1759, during the tensions of the French and Indian War in which the English were engaged. Following the American Revolutionary War, in which rebel colonial militia repeatedly attacked Cherokee towns because of their alliance with the British, the Cherokee were forced to cede large areas of territory. In 1785, General Andrew Pickens hosted a large gathering of Cherokee chiefs; they signed a treaty ceding all of the Jocassee gorges area, with the exception of northern Oconee County, to the United States. The Cherokee did not cede the Oconee mountains until 1815.

Settlers from the British Isles, mostly of Scottish and Irish descent, came from the backcountry of Virginia and Pennsylvania to this area, as well as from Charleston. United States and South Carolina land grants to European Americans in the Jocassee area date to 1791.

The Jocassee Hydro Station, owned by Duke Energy, is located between Lake Jocassee and Lake Keowee; it is a 610-megawatt, pumped storage facility. Near the Whitewater River, Bad Creek Hydroelectric Station is a 1,065-megawatt pumped-storage facility that started generating electricity in 1991 and is also owned by Duke Power. Both facilities provide jobs for residents of the surrounding area.

All content from Kiddle encyclopedia articles (including the article images and facts) can be freely used under Attribution-ShareAlike license, unless stated otherwise. Cite this article:
Lake Jocassee Facts for Kids. Kiddle Encyclopedia.