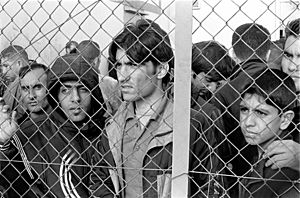 Millions of people around the world live in another country against the laws of that country.

An undocumented immigrant is an immigrant who lives in a country without permission. Many of these people migrate to a country in secret. Many others come to the country legally as a visitor, then stay in the country when they should legally going home. Sometimes, they work illegally and live in bad conditions.

Illegal immigration tends to be people going from poorer to richer countries. Illegal residence in another country creates the risk of detention, deportation, and/or other sanctions. 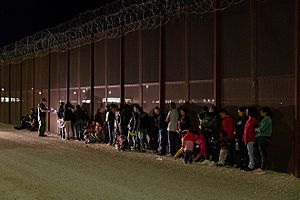 A large group of people claimed by the U.S. Customs and Border Protection to be illegal aliens.

All content from Kiddle encyclopedia articles (including the article images and facts) can be freely used under Attribution-ShareAlike license, unless stated otherwise. Cite this article:
Illegal immigration Facts for Kids. Kiddle Encyclopedia.