Robbins is a city in Moore County, North Carolina, United States. The population was 1,097 at the 2010 census. 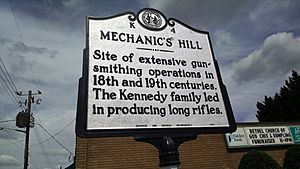 The Town, now known as Robbins, actually began in 1795 when gunsmith Alexander Kennedy and his family left Philadelphia to settle along Bear Creek. Kennedy set up a factory, which produced long rifles for American soldiers, near the site of the present day Robbins Water Plant. The Kennedy rifle works continued in operation until 1838 and the place became known as Mechanics Hill.

In 1891, the Durham and Charlotte Railroad railway connected Gulf, in Chatham County, to Troy, in Montgomery County. The railroad reached Mechanics Hill around 1899. Railroad construction added many jobs and greatly increased the number of settlers. The railroad not only created its own jobs, it generated commerce by providing a ready means of transportation for turpentine, talc, pottery, lumber, agricultural products, and passengers. John B. Lennig was President and owner of the company. Mr. Lennig was here, off and on, for about 12 years. During that time, town lots and streets were designed. A map was registered at the Moore County Register of Deeds Office on March 24, 1900 and the Town was named Elise, in honor of Lennig's daughter.

In 1896, the John L. Frye Company, a producer of lumber for the rail and pallet industries, was established. Railroads across the US are supported by cross ties still made here in Robbins today.

Education was a major concern for the citizens of Elise and the surrounding communities. Some local businessmen and Mr. Lennig met many times to discuss these concerns. These meetings resulted in the founding of Elise Academy in 1904. The academy had a very proud standing and children from here, and from other states and countries, attended this first class establishment. Elise Academy operated until 1940, when it was sold to the Moore County Board of Education.

In 1890,the great inventor Thomas Edison came down to take option on gold mining interests in the Carter's Mill area. Between 1923 and 1924, generators were installed at Carter’s Mill, along Bear Creek, adjacent to Elise, and the first power was supplied to this area. In 1924 and 1925, William Cowgill built the first textile plant here, operating it as Moore Mills Textiles Plant. Three different companies operated that mill until September, 1930, when Karl Robbins, a Russian immigrant, purchased the mill and renamed it Pinehurst Silk Mills.

In 1935, the Town’s name was changed again. The name was changed to Hemp, to avoid confusion between Elise and another town in North Carolina which had a similar name. Karl Robbins brought great prominence to Hemp. He was responsible for a modern water treatment plant and a wastewater disposal system being completed in 1937. He also provided for recreational facilities and a baseball park. 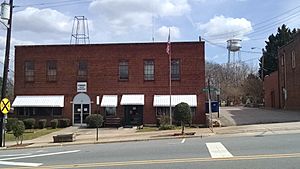 In honor of Karl Robbins, the citizens of Hemp changed the name to Robbins. The town officially became Robbins in 1943, by act of the General Assembly.

Robbins, like other rural towns in the South, began to suffer loss to its manufacturing base around 1990 and escalated throughout the 90s. According to the Employment Security Commission, Robbins has lost 1,447 jobs since 1990. The town has also lost a very large portion of its water and sewer customer. 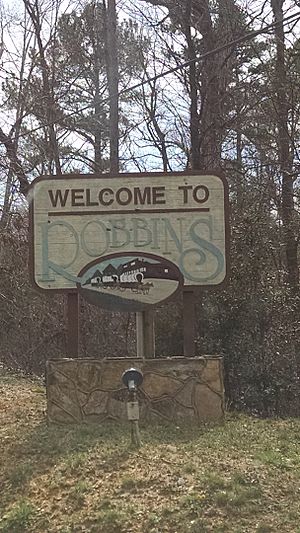 Sign at northern edge of town along NC Highway 705.

Robbins is located on North Carolina Highway 705, the Pottery Highway.

According to the United States Census Bureau, the city has a total area of 1.3 square miles (3.4 km2), all of it land.

There are many attractions in the Robbins area such as the annual Farmers Day, the Northern Moore Fiddlers Convention, etc. The most popular places in Robbins are Milliken (mill-a-ken) Park, Robbins Mill Pond Park, Bear Creek Trails, Bear Creek, Tracy Brown Park, Jake's Place Cafe, Carolina Fried Chicken Restaurant, The Little Village Restaurant and War Sport Industries. Currently, Robbins is in the middle of restoring its historic theater and train depot. It is also home to the Standard Mineral Company, a mine on the outskirts of town that ships Pyrophyllite all over the world. War Sport Industries is maintaining the towns heritage of gun manufacturing with the opening of gun and ammo manufacturing facilities. Robbins regularly host Robin Sage, a training exercise by the United States ArmySpecial Forces that is the litmus test for soldiers striving to earn the coveted Green Beret.

All content from Kiddle encyclopedia articles (including the article images and facts) can be freely used under Attribution-ShareAlike license, unless stated otherwise. Cite this article:
Robbins, North Carolina Facts for Kids. Kiddle Encyclopedia.