Its county seat is Carthage and its largest town is Pinehurst. It is a border county between the Piedmont and the Atlantic Coastal Plain.

In the early years, the economy was dependent on agriculture and lumber. The lumber business expanded after railroads reached the area, improving access to markets. It lies at the northern edge of the area known as the Sandhills region, and developed resorts in the late 19th century, aided by railroads.

Since the early 21st century, Moore County comprises the Aberdeen-Pinehurst-Southern Pines, North Carolina Micropolitan Statistical Area. Moore County is a part of the Fayetteville Combined Statistical Area, which as of 2019 had an estimated population of 854,826, making it the 65th largest CSA in the United States.

The county was formed in 1785 from Cumberland County. It was named after Alfred Moore, an officer in the American Revolutionary War and associate justice of the Supreme Court of the United States.

In 1907 parts of Moore County and Chatham County were combined to form Lee County.

Celebrities who frequent or have private homes in the area are Michael Jordan, Tiger Woods, Jack Nicklaus, and Sean Connery. Past residents of the area include Annie Oakley, Harvey Firestone, and John D. Rockefeller. 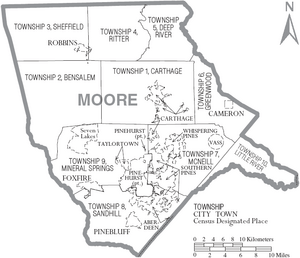 The county is divided into ten townships, which are both numbered and named:

Attractions and places of interest

All content from Kiddle encyclopedia articles (including the article images and facts) can be freely used under Attribution-ShareAlike license, unless stated otherwise. Cite this article:
Moore County, North Carolina Facts for Kids. Kiddle Encyclopedia.