Carthage is a town in Moore County, North Carolina, United States. The population was 2,205 at the 2010 Census. It is the county seat of Moore County. 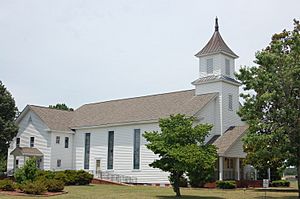 The town was the home of the Tyson Buggy Company, a predominant cart and buggy manufacturer in the 1800s. A common story told by residents is that after the closing of the Tyson Buggy Company, Henry Ford was interested in buying the old plant and converting it into a car assembly line. According to the legend, the owners refused to let Ford buy the plant and so he moved on to build a plant in Detroit. This story is often repeated despite a lack of evidence, and runs contrary to the established pattern of Ford (who was born and raised in Detroit) starting all of his businesses in Detroit. A few years afterwards, the Tyson Buggy plant burned down.

Another common story of folklore is that the town was originally to be the home of the University of North Carolina. In this story, however, city leaders determined that they didn't want the university built there. City leaders told the State that Carthage was on too steep of a hill for locomotives to climb and that access to the University would be limited if built there. This often-repeated story fails to take into consideration the fact that locomotives were not invented until two decades after the university had been built in Chapel Hill.

The town now has an annual event that takes place every spring called the Buggy Festival. This event is used to showcase the history of the town as well as show off music, hot rods, old tractors, old buggies made by the Tyson Buggy Company, and crafts from potteries in the surrounding areas. This event takes place in the town square around the Old Court House, considered to be a historic landmark.

There were 653 households out of which 28.5% had children under the age of 18 living with them, 49.0% were married couples living together, 14.9% had a female householder with no husband present, and 32.6% were non-families. 29.7% of all households were made up of individuals and 13.9% had someone living alone who was 65 years of age or older. The average household size was 2.42 and the average family size was 3.02.

All content from Kiddle encyclopedia articles (including the article images and facts) can be freely used under Attribution-ShareAlike license, unless stated otherwise. Cite this article:
Carthage, North Carolina Facts for Kids. Kiddle Encyclopedia.