The county was formed in 1754 from Bladen County. It was named for Prince William Augustus, Duke of Cumberland (1721-1765), captain-general of the British army and victorious commander at the Battle of Culloden. 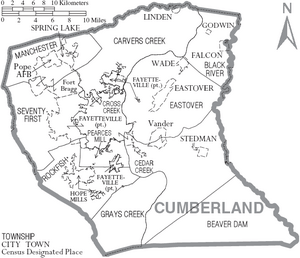 All content from Kiddle encyclopedia articles (including the article images and facts) can be freely used under Attribution-ShareAlike license, unless stated otherwise. Cite this article:
Cumberland County, North Carolina Facts for Kids. Kiddle Encyclopedia.