Bladen County is a county located in the U.S. state of North Carolina. As of the 2020 Census, the population was 29,606. Its county seat is Elizabethtown. The county was created in 1734 as Bladen Precinct and gained county status in 1739.

Bladen County was formed in 1734 as Bladen Precinct of Bath County, from New Hanover Precinct. It was named for Martin Bladen, a member of the Board of Trade. With the abolition of Bath County in 1739, all of its constituent precincts became counties. 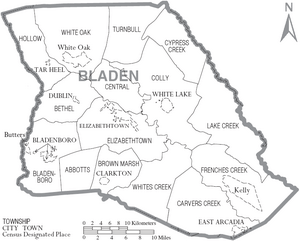 The population ranking of the following table is based on the 2010 census of Bladen County.

Agriculture constitutes a major part of Bladen County's economy. Smithfield Foods employs over 5,000 workers at its pork processing facility north of the town of Tar Heel, the largest such plant in the world. The county is the largest producer of blueberries in the state. Area farmers also grow soybeans, peanuts, corn, wheat, and cotton.

All content from Kiddle encyclopedia articles (including the article images and facts) can be freely used under Attribution-ShareAlike license, unless stated otherwise. Cite this article:
Bladen County, North Carolina Facts for Kids. Kiddle Encyclopedia.