Kids Encyclopedia Facts
Not to be confused with Brunswick, North Carolina.

Brunswick County is the southernmost county in the U.S. state of North Carolina. As of the 2010 census, the population was 107,431. Its population was only 73,143 in 2000, making it one of the fastest-growing counties in the state. With a nominal growth rate of about 47% in ten years, much of the growth is centered in the eastern section of the county in the suburbs of Wilmington such as Leland, Belville and Southport. A 2019 estimated population of 142,820 makes Brunswick the 4th-fastest-growing county in the country. The county seat is Bolivia, which at a population of around 150 people is among the least populous county seats in the state.

Much of the economy of the county is built around tourism, with beach communities lying along the south-facing beaches past Cape Fear such as Bald Head Island (the southernmost point of North Carolina) and Oak Island being popular destinations. Calabash, on the border of South Carolina, is renowned for its fried seafood, with "Calabash-style" restaurants dotting the region. The proximity to EUE/Screen Gems Studios in nearby Wilmington has made Brunswick County a popular filming location for many movies and TV shows.

The county was formed in 1764 from parts of Bladen County and New Hanover County. It was named for the colonial port of Brunswick Town (now in ruins) which itself was named for Duchy of Brunswick-Lüneburg; at the time held by the British kings of the House of Hanover.

The Brunswick Nuclear Generating Station is to the north of Southport. 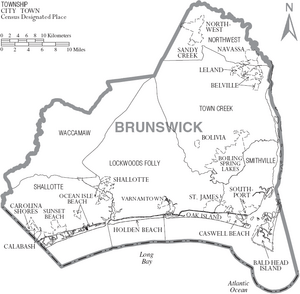 All content from Kiddle encyclopedia articles (including the article images and facts) can be freely used under Attribution-ShareAlike license, unless stated otherwise. Cite this article:
Brunswick County, North Carolina Facts for Kids. Kiddle Encyclopedia.