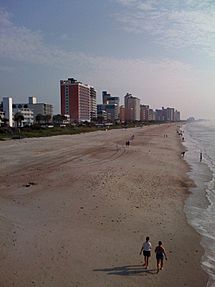 The Grand Strand is a large stretch of beaches on the East Coast of the United States extending from Little River to Georgetown in the U.S. State of South Carolina. It consists of more than 60 miles along an essentially uninterrupted arc of beach land, beginning around the Little River and terminating at Winyah Bay. The population of the Grand Strand was 329,449 at the 2010 United States Census.

The area has become a major tourist attraction along the Southeastern coast, with its primary city, Myrtle Beach, attracting over ten million visitors each season. It is home to numerous restaurants and theme parks, making it popular with families and college students in the summer and snowbirds during the winter.

According to Köppen climate classification, the Myrtle Beach area has a humid subtropical climate that is heavily influenced by the Atlantic Ocean, giving the area a more oceanic feel. The city experiences cool winters and hot, humid summers.

Rainfall is plentiful throughout the whole year, but most concentrated during the summer months, where it is not uncommon for almost every day to have at least a 30% chance of rain. The area is susceptible to strong thunderstorms, especially in the summer months. These typically have a very short duration, although some may have intense hail with tornadoes rarely.

Snowfall is extremely rare in this part of the state, but does occasionally occur, such as when Myrtle Beach received five inches of snow in January 2000. Another severe ice and snow storm struck on January 28, 2014. 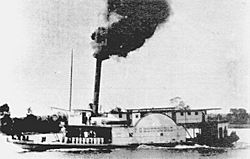 Prior to the arrival of Europeans, the Long Bay area was inhabited by the native Waccamaw Tribe. The Waccamaw used the river for travel and fished along the shore around Little River. Waties Island, the primary barrier island along Long Bay, has evidence of burial and shell mounds, remains of the visiting Waccamaw.

The first European settler along Long Bay arrived in the late 18th Century, attempting to extend the plantation system outward towards the ocean. Records are sparse from this period, with most of the recorded history pieced together from old land grants documents. These settlers were met with mixed results, producing unremarkable quantities of indigo and tobacco as the coast's soil was sandy and most of the crop yields were of an inferior quality.

Prior to the American Revolution, the area along the future Grand Strand was essentially uninhabited. Several families received land grants along the coast, including the Withers: John, Richard, William, and Mary. This family received an area around present-day Wither's Swash, also known as Myrtle Swash or the 8-Mile Swash. A separate grant was granted to James Minor, including a barrier island named Minor Island, now Waties Island, off of the coast near Little River.

Mary Wither's gravestone at Prince George Winyah Episcopal Church speaks to the remoteness of the former Strand: "She gave up the pleasures of Society and retired to Long Bay, where she resided a great part of her life devoted to the welfare of her children."

As the American colonies gained independence, the area remained essentially unchanged, and the coast remained barren. George Washington scouted out the Southern states during his term, traveling down the King's Highway. He stayed a night at Windy Hill (part of present-day North Myrtle Beach) and was led across Wither's Swash to Georgetown by Jeremiah Vereen.

The Withers family remained one of the few settlers around Myrtle Beach for the next half-century. In 1822, a strong hurricane swept the house of R. F. Withers into the ocean, drowning 18 people inside. The tragedy made the Withers family decide to abandon their plots along the coast. Left unattended, the area began to return to forest. 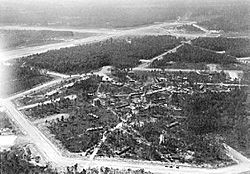 On February 28, 1899, Burroughs and Collins, predecessor of modern-day Burroughs and Chapin, received their charter to build the Conway & Seashore Railroad to transport timber from the coast to inland customers. The railroad began daily service on May 1, 1900 with two wood-burning locomotives. One of the engines was dubbed The Black Maria and came second-hand from a North Carolina logging operation. A community named "Withers" post office was established at the site of the old Swash.

After the railroad was finished, employees of the lumber and railroad company would take train flatcars down to beach area on their free weekends, becoming the first Grand Strand tourists. The railroad terminus was nicknamed "New Town", contrasting it with the "Old Town", or Conway.

At the turn of the 20th century, Franklin Burroughs envisioned turning New Town into a tourist destination rivaling the Florida and northeastern beaches. Burroughs died in 1897, but his sons completed the railroad's expansion to the beach and opened the Seaside Inn in 1901.

After its founding, New Town continued to grow until 1957, when it incorporated. A contest was held to name the town and Burroughs' wife suggested honoring the locally abundant shrub, the Southern Wax Myrtle (Myrica cerifera). So the town was named Myrtle Beach.

In 1937, Myrtle Beach Municipal Airport was built, however it was promptly taken over by the United States Army Air Corps in 1940 and converted into a military base. Commercial flights began in 1976 and shared the runway for over 15 years until the air base closed in 1993. Since then the airport has been named Myrtle Beach International Airport. In 2010 plans to build a new terminal were approved. In 1940, Kings Highway was paved, giving Myrtle Beach its first primary highway.

Communities along the Grand Strand

All content from Kiddle encyclopedia articles (including the article images and facts) can be freely used under Attribution-ShareAlike license, unless stated otherwise. Cite this article:
Grand Strand Facts for Kids. Kiddle Encyclopedia.