Conway is a city in Horry County, South Carolina, United States. The population was 17,103 at the 2010 census, and estimated at 25,956 in 2019. It is the county seat of Horry County and is part of the Myrtle Beach metropolitan area. It is the home of Coastal Carolina University.

Numerous buildings and structures located in Conway are on the National Register of Historic Places. Among these is the City Hall building, designed by Robert Mills, architect of the Washington Monument. Since the completion of the Main Street USA project in the 1980s, Conway's downtown has been revitalized with shops and bistros. Highlighting the renovation of the downtown area is the Riverwalk, an area of restaurants which follows a stretch of the Waccamaw River that winds through Conway.

Conway is one of the oldest towns in South Carolina. Originally early English colonists named the village as named "Kings Town" but soon changed it to "Kingston". The town was founded in 1732 as part of Royal Governor Robert Johnson's Township Scheme. It was laid out on a bluff overlooking the Waccamaw River in what is now known as Horry County. 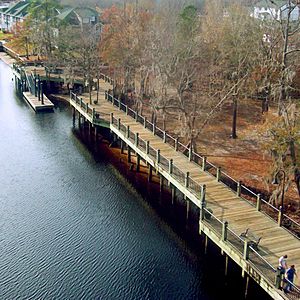 The Conway marina, seen from the Waccamaw River Bridge

Many area residents fought in the American Revolution, and small engagements were fought near Kingston at Bear Bluff and at Black Lake. Francis Marion, who was known as the "Swamp Fox", had an encampment near Kingston just across the Waccamaw River.

After the war, patriotic citizens wanted to discard the name that honored Great Britain's King George II. The County's name was changed to Horry (pronounced oh-ree) in honor of General Peter Horry in 1801, and a courthouse was established in Kingston. "Kingston" was later changed to "Conwayborough", for General Robert Conway. In 1883, the General Assembly changed the name to the current name of Conway.

Conway, the county seat of Horry County, is situated in the South Carolina Coastal Plain, on the western banks of the Waccamaw River, and is approximately 25 km from the Atlantic Ocean. 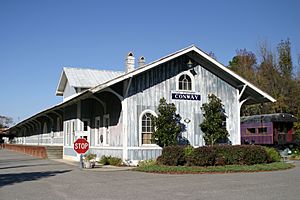 Old train station (no longer in use)

Conway is home to the Conway-Horry County Airport (HYW), a small airport located 3 miles outside of town, along US-378.

R. J. Corman Railroad's Carolina Line is a short line railroad which serves parts of North and South Carolina. Conway is located on the railroad's Chadbourn, NC-Myrtle Beach, SC branch. The historical Conway railroad depot is located along this branch, although the depot is now an office building.

Conway is the home of Kimbel Library and the Rebecca Randall Bryan Art Gallery at Coastal Carolina University. The gallery houses differing exhibits throughout the year. Admission is free, and the gallery is open to the public.

Employers located in the Conway area include:

Grainger Generating Station was a coal-fired power plant operated by Santee Cooper. It generated electricity from 1966 until its retirement in 2012.

Most of the county is served by a single public school system, Horry County Schools. Private schools include Conway Christian School.

Conway is home to two major institutes of higher learning, Coastal Carolina University and Horry-Georgetown Technical College. It is also home to a branch of Webster University, an MBA graduate school, and North American Institute of Aviation (NAIA), a flight school.

Conway has a public library, a branch of the Horry County Memorial Library.

HTC Center is a 3,370-seat multi-purpose arena located on the campus of Coastal Carolina University in Conway. It is home to the university's men's and women's basketball teams, and the women's volleyball teams. It replaced Kimbel Arena for this purpose. 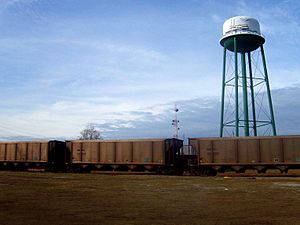 Trains in front of Conway watertower

Conway is home to the Conway-Horry County Airport (HYW), a small airport located 4 miles (6 km) west of town, along US-378.

R. J. Corman Railroad's Carolina Line is a short-line railroad which serves parts of North and South Carolina. Conway is located on the railroad's Chadbourn, NC-Myrtle Beach, SC branch. The historical Conway railroad depot is located along this branch, although the depot is now an office building.

All content from Kiddle encyclopedia articles (including the article images and facts) can be freely used under Attribution-ShareAlike license, unless stated otherwise. Cite this article:
Conway, South Carolina Facts for Kids. Kiddle Encyclopedia.