Horry County ( ORR-ee) is a county in the U.S. state of South Carolina. As of the 2010 census, its population was 289,650, making it the fifth-most populous county in South Carolina. The county seat is Conway.

Horry County (pronounced O'Ree) was incorporated in 1801. At that time the county had an estimated population of 550. It was completely surrounded by water, which forced the inhabitants to survive virtually without any assistance from the "outside world". This caused the county residents to become an extremely independent populace, and they named their county "The Independent Republic of Horry". The county was named after, and in honor of, Revolutionary War hero, Peter Horry who was born in South Carolina sometime around 1743. Horry started his military career in 1775 as one of 20 captains, elected by the Provincial Congress of South Carolina, to serve the 1st and 2nd Regiments. In 1790 he was assigned to the South Carolina militia under Brigadier General Francis “Swamp Fox” Marion

On October 29, 2012, the county paid homage to the man for whom the county is named by unveiling a bronze sculpture of Peter Horry inside the Horry County Government and Justice Center. The sculpture was designed by Lubbock, Texas artist Garland Weeks, and Coastal Monument of Conway, South Carolina designed the stone base. Located on the base of the sculpture are the names of the 1801 commissioners on one side and the names of 2011 Horry County Council members on the other side a brief bio of Peter Horry on the front. It cost slightly more than $16,200 for both the bust/sculpture and the stone base.

Horry County is located in the northeastern corner of South Carolina. It is a diverse land made up of rivers, beaches, forest and swamps. Horry County is bordered by the Atlantic Ocean to the east, the Little Pee Dee River and Drowning Creek (also known as the Lumber River) on Horry's western side, and North Carolina to the north. Waccamaw River, approximately 140 miles (225 km) long, runs through southeastern North Carolina and eastern South Carolina into Horry County. The river runs through the coastal plain, along the eastern border between the two states, and into the Atlantic Ocean. 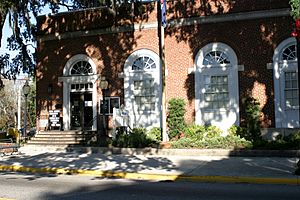 All content from Kiddle encyclopedia articles (including the article images and facts) can be freely used under Attribution-ShareAlike license, unless stated otherwise. Cite this article:
Horry County, South Carolina Facts for Kids. Kiddle Encyclopedia.