Kids Encyclopedia Facts
Not to be confused with Columbus, North Carolina.

Columbus County is a county located in the U.S. state of North Carolina, on its southeastern border. Its county seat is Whiteville. The 2020 census showed a loss of 12.9% of the population down to 50,623. This included inmate prison population of about 2500.

One of the most significant geographic features is the Green Swamp, a 15,907-acre area along highway 211 in the north-eastern portion of the county. It contains several unique and endangered species, such as the venus flytrap. The area contains the Brown Marsh Swamp, and has a remnant of the giant longleaf pine forest that once stretched across the Southeast from Virginia to Texas.

The county was formed in 1808 in the early federal period from parts of Bladen and Brunswick counties. It was named for Christopher Columbus.

The Waccamaw Siouan Indians are one of eight state-recognized tribes. Their homeland territory is at the edge of Green Swamp in present-day Columbus County. Historically, the "eastern Siouans" had territories extending through the area of Columbus County prior to any European exploration or settlement in the 16th century.

English colonial settlement in what was known as Carolina did not increase until the late 17th and early 18th centuries. Following epidemics of infectious disease, the indigenous peoples also suffered disruption and fatalities during the colonial Tuscarora and Yamasee wars. Afterward most of the Tuscarora people migrated north, joining other Iroquoian-speaking peoples of the Iroquois Confederacy in New York State by 1722, when they declared their migration ended and official tribe relocated to that area.

The Waccamaw Siouan ancestors retreated for safety to an area of Green Swamp near Lake Waccamaw. Throughout the 19th century, the Waccamaw Siouan were seldom mentioned in the historical record. Toward the end of the century, the U.S. Census recorded common Waccamaw surnames among individuals in the small isolated communities of this area.

In 1910, the earliest-known governmental body of the Waccamaw Indians was officially created, named the Council of Wide Awake Indians. At a time of racial segregation in North Carolina schools, the council sought to gain public funding for Indian schools, as the Lumbee (then known as Croatan Indians) had achieved in the late 19th century. They also hoped to gain federal recognition as a tribe, but it was rare for landless Indians and was associated with the tribes that had official treaties with the United States, typically those on reservations. The Council opened its first publicly funded school in 1933, founding others soon after. They continued to have difficulty in getting state funding for schools, as minorities had been disenfranchised in North Carolina since passage of a suffrage amendment in 1900 that created barriers to voter registration. The Council campaigned for federal recognition in 1940 during the President Franklin D. Roosevelt administration, which had passed the Indian Reorganization Act of 1934, encouraging tribes to re-establish self-government.

The name Waccamaw Siouan was first officially used in US government documents in 1949, when a bill intended to grant the tribe federal recognition was introduced in Congress by the representative of this district. The bill was defeated in committee the following year. But changes in federal policy following Native American activism in the 1960s and 1970s enabled the Waccamaw Indians to obtain more public funding and economic assistance even without federal recognition.

The Waccamaw Siouan have been recognized by the North Carolina Commission of Indian Affairs since 1971, as one of eight state-recognized tribes. The tribe organized as the Waccamaw Siouan Development Association (WSDA), a nonprofit group founded in 1972. The group is headed by a nine-member board of directors, elected by secret ballot in elections open to all enrolled tribal members over the age of 18; in addition, the board includes a chief, whose role is largely symbolic. 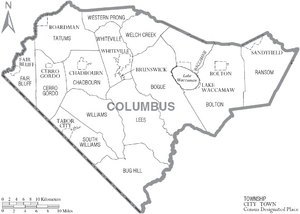 The economy of Columbus County centers on agriculture and manufacturing. Columbus farmers produce crops such as pecans and peanuts, along with soybeans, potatoes, and corn. Cattle, poultry, and catfish are other agricultural products in the county.

Factories in the region produce textiles, tools, and plywood. Household products such as doors, furniture, and windows are also manufactured in Columbus.

in July 2014, Carolina Southern agreed to begin the process of allowing the counties of Horry County, South Carolina, Marion, South Carolina and Columbus County, NC to assume control of the area rail lines. The goal was to repair the railroad tracks and bridges through local governments and then to find a buyer to re-establish service to the area. A public hearing on the matter was held on October 6, 2014. During that meeting, the Columbus County Commissioners voted to support the initiative to restart rail service with a 10-year grant for the program. Some of the commissioners may not have revealed that they will benefit from the re-establishment of rail service. The Horry County Council in October 2014 also voted to provide funding to reestablish railroad service to the area. Although originally it was thought service could be restored as early as spring 2015, however, the sale of the railroad was not completed until August, 2015 to R.J. Coleman Railroad.. A new target date of February 2016 was announced, as millions of dollars are expected to be spent repairing the rail lines that have been idle since 2011.

All content from Kiddle encyclopedia articles (including the article images and facts) can be freely used under Attribution-ShareAlike license, unless stated otherwise. Cite this article:
Columbus County, North Carolina Facts for Kids. Kiddle Encyclopedia.