Riegelwood is an unincorporated community and census-designated place (CDP) in Columbus County, North Carolina, United States. As of the 2010 census it had a population of 579. It is a location of a saw mill and a paper mill.

The Black Rock Plantation House was listed on the National Register of Historic Places in 2014.

Riegelwood is located near the eastern tip of Columbus County, south of Mitchell Landing on the Cape Fear River, site of an International Paper plant. North Carolina Highway 87 passes through Riegelwood, leading southeast 2 miles (3 km) to U.S. Routes 74 and 76 in Delco and northwest 30 miles (48 km) to Elizabethtown. Wilmington is 19 miles (31 km) to the southeast via US 74/76.

On November 16, 2006, at 6:29 am EST, a tornado warning had been issued for eastern Columbus County, and prior to that a severe thunderstorm warning was issued for the same area at 6:21 am. At 6:37, an F3 tornado struck a mobile home park and killed eight people, including two children, Danny Jacobs, 6, and Miguel Martinez, 13. Twenty people were injured. The tornado was a part of a 3-day long tornado outbreak in the south where four other deaths were reported. Riegelwood was one of the hardest hit areas. 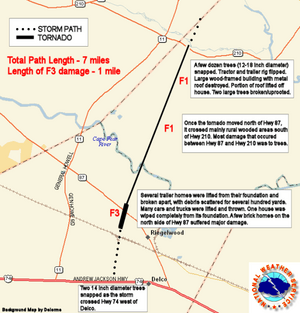 Path of the Riegelwood Tornado

On Friday, November 17, 2006 a NOAA National Weather Service storm survey team assessed the tornado damage in Riegelwood and rated it at F3 on the Fujita scale for nearly a mile in Riegelwood, with winds approaching 200 miles per hour (320 km/h). The maximum width of the tornado was 300 yards where the F3 damage occurred. The rest of the 7-mile (11 km) damage path was narrow, less than a 100 yards wide, and rated at F1 with winds less than 100 mph extending north across Columbus County into western Pender County. 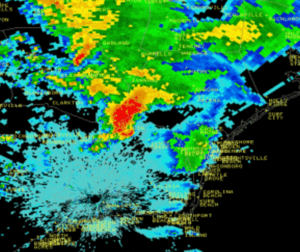 The Columbus County sheriff reported thirty homes destroyed in the F3 damage area, and another three structures were damaged in Pender County just west of Currie.

All content from Kiddle encyclopedia articles (including the article images and facts) can be freely used under Attribution-ShareAlike license, unless stated otherwise. Cite this article:
Riegelwood, North Carolina Facts for Kids. Kiddle Encyclopedia.