The North Carolina Museum of Natural Sciences (NCMNS) is located in Raleigh, North Carolina as the oldest established museum in North Carolina and the largest museum of its kind in the Southeastern United States. With about 1.2 million visitors annually, as of 2013 it was the state's most popular museum or historic destination among visitors.

The museum has five facilities on four campuses: the Nature Exploration Center and Nature Research Center on Jones Street in downtown Raleigh, the Prairie Ridge Ecostation satellite facility and outdoor classroom in northwest Raleigh near William B. Umstead State Park, the former North Carolina Museum of Forestry in Whiteville, and the former Grifton Nature & Science Center in Grifton. In 2020 a new facility, the North Carolina Museum of Natural Sciences at Greenville, was announced and is set to be completed in 2021. NCMNS is a division of the state Department of Natural and Cultural Resources. 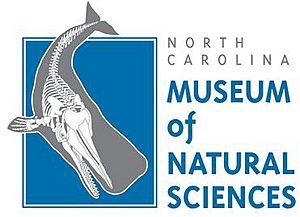 The North Carolina State Museum was created in 1879, by combining two existing state-owned collections of geologic and agricultural specimens. The museum was originally housed in the Briggs building on Fayetteville Street. The museum's collections, outreach and education programs, and status grew over the next 60 years under the stewardship of H.H. Brimley. As part of the Department of Agriculture, the State Museum moved in 1887 to a former hotel on Edenton Street across from the Capitol building. An annex was added in 1899, but the entire facility was replaced by a purpose-built building in 1924. The facility was later renamed the North Carolina State Museum of Natural History.

In the 1950s and again in the 1990s, shifts in education further expanded the museum's holdings as universities donated their collections to the state. In 1986, it became the North Carolina State Museum of Natural Sciences.

A new building opened later and NCMNS became the largest natural history museum in the Southeast. Also in 2000, the museum expanded with a new location: the Museum of Forestry in Whiteville was added as a satellite campus; this facility was later overhauled and reopened in 2015 as the NC Museum of Natural Sciences in Whiteville. Another location was added in 2004, with the opening of the Prairie Ridge Ecostation for Wildlife and Learning. The museum expanded its downtown campus in 2012, with the adjacent Nature Research Center.

NCMNS is administered by the Department of Natural and Cultural Resources. 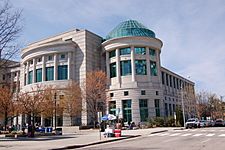 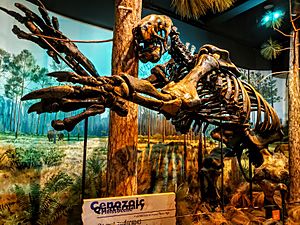 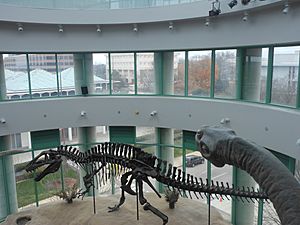 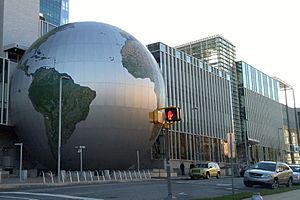 The NRC provides hands-on activities and visitor-viewing of scientists working in the NRC's four research laboratories. The museum also makes use of distance learning to broadcast lessons and virtual field trips to classrooms around the state. 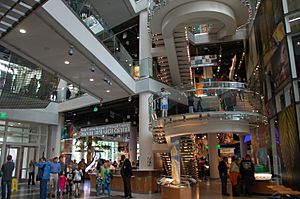 The Nature Research Center's four research labs are part of the museum's Research and Collections department. These spaces (normally reserved for behind-the-scenes work) have transparent glass walls through which the public can observe firsthand as research scientists do their work. The atrium is home to the LCD sculpture Patterned by Nature.

Prairie Ridge furthers the museum's mission of enhancing public understanding and appreciation of the natural environment by providing an outdoor learning space while acting as a model for renewable and sustainable energy.

Displays and interactive exhibits include an outdoor Tree Trail and Fossil Dig Pit, and the museum offers educational program experiences and special events.

The North Carolina Museum of Natural Sciences at Greenville, formerly known as A Time For Science (ATFS), is a satellite facility of the North Carolina Museum of Natural Sciences located in Greenville, North Carolina. It and the Grifton Nature and Science Center were acquired through a partnership between NCMNS and ATFS. The center is set to be renovated with new exhibits being added, and is set to reopen in 2021. The Museum at Greenville will largely be based on the Raleigh facility, but with more exhibits focusing on subjects relevant to northeastern North Carolina such as pirates and pollinators, and will also include resources from East Carolina University.

NCMNS hosts many special events through the year. The most notable are:

On Groundhog Day, February 2, Sir Walter Wally makes his annual prediction for the arrival of the upcoming spring. Sir Walter has a 58% accuracy rating, which has earned him nationwide recognition for his prognostication ability.

BugFest, held in mid-September every year, is a free day-long festival devoted to insects. This event attracts more than 35,000 visitors per year. A smaller version of the festival, called BugFest South, is held at the Whiteville facility in May or June.

NCMNS participates in First Night Raleigh each year on December 31. In 2012, First Night drew 80,000 people to the blocks around the museum.

Acquisition of the Dueling Dinosaurs

The Dueling Dinosaurs is an extremely well-preserved and scientifically important specimen from Montana of a Triceratops and Tyrannosaurus possibly locked in combat. First found in 2006, there were unsuccessful attempts by the fossil's finders to sell it to museums or private collectors for over a decade until the NCMNS reached out in 2016, prompting negotiations to purchase the fossil, with funds being raised by the nonprofit Friends of the North Carolina Museum of Natural Sciences. Legal issues significantly slowed these negotiations until they were resolved in 2020, leading the museum to announce its acquisition of the fossils as part of its permanent collection. The fossils are set to be put on display in the Nature Research Center in 2022.

All content from Kiddle encyclopedia articles (including the article images and facts) can be freely used under Attribution-ShareAlike license, unless stated otherwise. Cite this article:
North Carolina Museum of Natural Sciences Facts for Kids. Kiddle Encyclopedia.