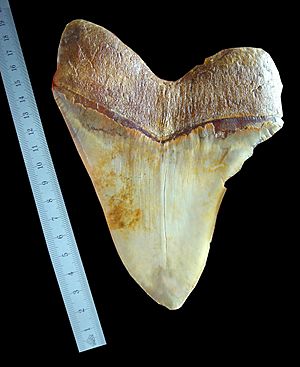 Megalodon tooth with slant height (diagonal length) of over 170 mm. 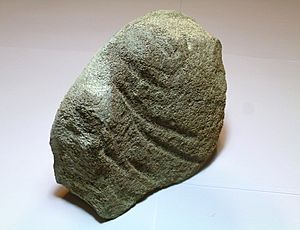 The megalodon was the largest shark of all time. Its scientific name is Carcharodon megalodon. It lived from the late Oligocene to early Pleistocene epochs, 28 to 1.5 million years ago (mya).

This giant of a shark was a huge version of the current great white shark,Carcharodon carcharias. Megalodon had teeth, which are among the largest ever found, over 7 inches (18 cm) long. Nicolaus Steno was the first to recognise the teeth as those of a giant shark. The shark was up to 52 feet long (16 meters) and weigh over 60 tons.

The skeleton of a Megalodon was made of cartilage, but it was calcified: it had calcium to strengthen it. Megalodon teeth, however were bone and can be found in all oceans. Other remains found are vertebrae.

Fossil records of C. megalodon indicate that it occurred in subtropical to temperate latitudes. Before the formation of the Isthmus of Panama, the seas were relatively warmer. This would have made it possible for the species to live in all the oceans of the world.

Megalodon hunted large and medium-sized whales, attacking the bony areas, such as chest, fins, or tail. This would stop the whale, or it could kill quickly with a fatal bite to the chest region. Megalodon could bite with the one of the strongest bites in the animal kingdom's history.

Its great size, high-speed swimming capability, and powerful jaws coupled with formidable killing apparatus, made it an apex predator eating a range of fauna.

Marine mammals were regular prey targets for C. megalodon. Many whale bones have been found with clear signs of large bite marks (deep gashes) made by teeth that match those of C. megalodon, and various excavations have revealed C. megalodon teeth lying close to the chewed remains of whales, and sometimes in direct association with them. Fossil evidence of interactions between C. megalodon and pinnipeds also exist. In one interesting observation, a 127 millimetres (5.0 in) C. megalodon tooth was found lying very close to a bitten earbone of a sea lion. 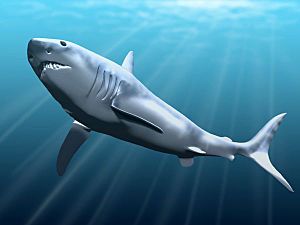 One interpretation on how megalodon appeared was that it was a robust-looking shark, and may have had a similar build to the great white shark. The jaws may have been blunter and wider than the great white, and the fins would have also been similar in shape, though thicker due to its size. It may have had a pig-eyed appearance, in that it had small, deep-set eyes.

Another interpretation is that megalodon bore a similarity to the whale shark (Rhincodon typus) or the basking shark (Cetorhinus maximus). The tail fin would have been crescent-shaped, the anal fin and second dorsal fin would have been small, and there would have been a caudal keel present on either side of the tail fin (on the caudal peduncle). This build is common in other large aquatic animals, such as whales, tuna, and other sharks, in order to reduce drag while swimming. The head shape can vary between species as most of the drag-reducing adaptations are toward the tail-end of the animal. 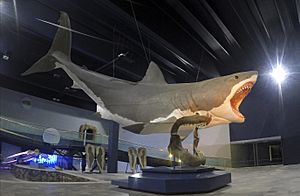 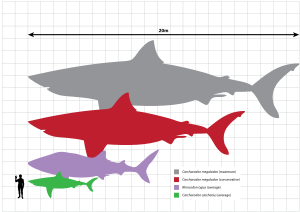 Megalodon (gray and red representing the largest and smallest estimates) with the whale shark (violet), great white shark (green), and a human (black) for scale

Due to fragmentary remains, there have been many contradictory size estimates for megalodon, as they can only be drawn from fossil teeth and vertebrae. Also because of this, the great white shark is the basis of its reconstruction and size estimation, as it is regarded as the best analogue to megalodon. Various size estimates exist for megalodon; in 1973, Hawaiian ichthyologist John E. Randall estimated that the maximum length attained by C. megalodon was about 13 meters (43 ft), while in the 1990s, marine biologists Patrick J. Schembri and Stephen Papson opined that C. megalodon may have approached a maximum of around 24 to 25 meters (79 to 82 ft) in total length; Gottfried and colleagues asserted that C. megalodon could have reached a maximum of 20.3 meters (67 ft) in total length. Nowadays, the commonly acknowledged maximum total length of C. megalodon is about 18 meters (59 ft), with the average size being 10.5 meters (34 ft), compared to the maximum recorded sizes of the great white shark at 6.1 meters (20 ft) and the whale shark (the largest extant fish) at 12.65 m (42 ft). It is possible that different populations of megalodon around the globe had different body sizes and behaviors due to different ecological pressures. If it did attain a size of over 16 meters (52 ft), it would have been the largest known fish that has ever lived, surpassing the Jurassic fish Leedsichthys.

Its large size may have been due to climatic factors and the abundance of large prey items, and it may have also been influenced by the evolution of regional endothermy (mesothermy) which would have increased its metabolic rate and swimming speed. Since the otodontid sharks are considered to have been ectotherms, and megalodon was a close relative to them, megalodon may have also been ectothermic. Contrary to this, the largest contemporary ectothermic sharks, such as the whale shark, are filter feeders, implying some metabolic constraints with a predatory lifestyle. That is to say, it is unlikely that megalodon was ectothermic.

Gordon Hubbell from Gainesville, Florida, possesses an upper anterior megalodon tooth whose maximum height is 18.4 centimeters (7.25 in), one of the largest known tooth specimens from the shark. In addition, a 2.7-by-3.4-meter (9 by 11 ft) megalodon jaw reconstruction developed by fossil hunter Vito Bertucci contains a tooth whose maximum height is reportedly over 18 centimeters (7 in).

The first attempt to reconstruct the jaw of megalodon was made by Bashford Dean in 1909, displayed at the American Museum of Natural History. From the dimensions of this jaw reconstruction, it was hypothesized that megalodon could have approached 30 meters (98 ft) in length. Dean had overestimated the size of the cartilage on both jaws, causing it to be too tall. 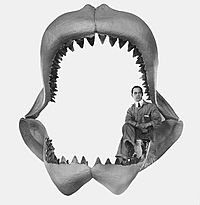 Reconstruction by Bashford Dean in 1909 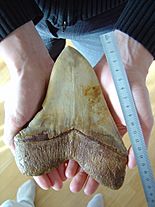 John E. Randall, an ichthyologist, used the enamel height (the vertical distance of the blade from the base of the enamel portion of the tooth to its tip) to measure the length of the shark, yielding a maximum length of about 13 meters (43 ft). Tooth enamel height does not necessarily increase in proportion to the animal's total length.

Shark researchers Michael D. Gottfried, Leonard Compagno, and S. Curtis Bowman proposed a linear relationship between a shark's total length and the height of the largest upper anterior tooth. The proposed relationship is: total length in meters = − (0.096) × [UA maximum height (mm)]-(0.22). They had estimated the average height, based on the slant height of the largest tooth discovered, for large female megalodon to be 15.6 meters (51 ft), though larger teeth may exist.

In 2002, shark researcher Clifford Jeremiah proposed that total length was proportional to the root width of an upper anterior tooth. He claimed that for every 1 centimeter (0.39 in) of root width, there are approximately 1.4 meters (4.6 ft) of shark length. Jeremiah pointed out that the jaw perimeter of a shark is directly proportional to its total length, with the width of the roots of the largest teeth being a tool for estimating jaw perimeter. The largest tooth in Jeremiah's possession had a root width of about 12 centimeters (4.7 in), which yielded 16.5 meters (54 ft) in total length.

In 2002, paleontologist Kenshu Shimada of DePaul University proposed a linear relationship between tooth crown height and total length after conducting anatomical analysis of several specimens, allowing any sized tooth to be used. Shimada stated that the previously proposed methods were based on a less-reliable evaluation of the dental homology between megalodon and the great white shark, and that the growth rate between the crown and root is not isometric, which he considered in his model. Using this model, the upper anterior tooth possessed by Gottfried and colleagues corresponded to a total length of 15 meters (49 ft). Among the specimens found in the Gatún Formation of Panama, other shark researchers used this method and calculated a maximum length of 16.8 meters (55 ft) for a specimen, and for another a total length of 17.9 meters (59 ft). This result appears to be an error within the matrix, and the length of this individual is actually 19.6 meters (64 ft). 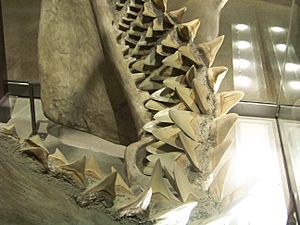 Reconstruction showing the position of the replacement teeth

The most common fossils of megalodon are its teeth. Diagnostic characteristics include a triangular shape, robust structure, large size, fine serrations, a lack of lateral denticles, and a visible V-shaped neck (where the root meets the crown). The tooth met the jaw at a steep angle, similar to the great white shark. The tooth was anchored by connective tissue fibers, and the roughness of the base may have added to mechanical strength. The lingual side of the tooth, the part facing the tongue, was convex; and the labial side, the other side of the tooth, was slightly convex or flat. The anterior teeth were almost perpendicular to the jaw and symmetrical, whereas the posterior teeth were slanted and asymmetrical.

Megalodon teeth can measure over 180 millimeters (7.1 in) in slant height (diagonal length) and are the largest of any known shark species. In 1989, a nearly complete set of megalodon teeth was discovered in Saitama, Japan. Another nearly complete associated megalodon dentition was excavated from the Yorktown Formations in the United States, and served as the basis of a jaw reconstruction of megalodon at the National Museum of Natural History (USNM). Based on these discoveries, an artificial dental formula was put together for megalodon in 1996.

All content from Kiddle encyclopedia articles (including the article images and facts) can be freely used under Attribution-ShareAlike license, unless stated otherwise. Cite this article:
Megalodon Facts for Kids. Kiddle Encyclopedia.