Left to right: The red building with a green glass front (north) wall holds the 2005 extension, the blue building with the glass pyramid top is the main building of poured concrete construction from 1981, and behind it, across a pedestrian bridge to the east is the Pier 4 marine mammal pavilion.

The National Aquarium - also known as National Aquarium in Baltimore and formerly known as Baltimore Aquarium - is a non-profit public aquarium located at 501 East Pratt Street on Pier 3 in the Inner Harbor area of downtown Baltimore, Maryland, in the United States. Constructed during a period of urban renewal in Baltimore, the aquarium opened on August 8, 1981. The aquarium has an annual attendance of 1.5 million visitors and is the largest tourism attraction in the State of Maryland. The aquarium holds more than 2,200,000 US gallons (8,300,000 l) of water, and has more than 17,000 specimens representing over 750 species. The National Aquarium's mission is to inspire conservation of the world's aquatic treasures. The aquarium's stated vision is to confront pressing issues facing global aquatic habitats through pioneering science, conservation, and educational programming.

The National Aquarium houses several exhibits including the Upland Tropical Rain Forest, a multiple-story Atlantic Coral Reef, an open ocean shark tank, and Australia: Wild Extremes, which won the "Best Exhibit" award from the Association of Zoos and Aquariums in 2008. The aquarium also has a 4D Immersion Theater. The aquarium opened a marine mammal pavilion on the adjacent south end of Pier 4 in 1990, and currently holds six Atlantic bottlenose dolphins. Of the six, five were born at the National Aquarium, one was born at another American aquarium.

The aquarium began in the mid-1970s when then-Mayor William Donald Schaefer, (1921-2011), and the Commissioner of the city Department of Housing and Community Development, Robert C. Embry, inspired by a visit to the two-decade old New England Aquarium on the waterfront of Boston, Massachusetts, conceived and championed the idea of an aquarium as a vital component of Baltimore's overall downtown and Inner Harbor redevelopment scheme. In 1976, Baltimore City residents supported the idea of an aquarium by voting for it on a bond loan referendum, and the groundbreaking for the facility took place on old Pier 3 facing East Pratt Street, just east of the newly completed World Trade Center-Baltimore in the city's Inner Harbor on August 8, 1978.

Although no federal funds were used for its construction, the United States Congress later designated the facility as the "national aquarium" in 1979. The aquarium opened to the public on August 8, 1981, after three years of construction, and one year after the booming "festival marketplace" of the two Harborplace shopping pavilions further west conceived by nationally famous, local developer James Rouse.

The National Aquarium, Baltimore's initial conceptual design, architecture and exhibit design was led by Peter Chermayeff of Peter Chermayeff LLC while he was at Cambridge Seven Associates.

The conceptual, architectural, and exhibit design for the Glass Pavilion expansion was led by Bobby C. Poole while at Chermayeff, Sollogub & Poole. After two decades, construction began on the Glass Pavilion north extension on September 5, 2002, and it opened to the public on December 16, 2005. It measures 64,500 sq ft (5,990 m2), and is 120 ft (37 m) high at the tallest point. 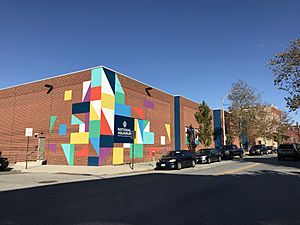 The National Aquarium was selected as the National Wildlife Federation's Maryland affiliate in 2011. The aquarium conducts conservation efforts through events to clean up the Chesapeake Bay Wetlands, and the aquarium's Marine Animal Rescue Program (MARP), which rescues, rehabilitates, and releases marine mammals. MARP has successfully rescued, treated, and returned seals, dolphins, porpoises, pilot whales, pygmy sperm whales, sea turtles, and a manatee to their natural habitats.

The National Aquarium Conservation Center (est. 2009) leads the aquarium's research efforts in resolving critical issues currently impacting coastal ecosystems and watersheds, ocean health, ecological aquaculture, and informs issues of environmental policy and advocacy through conservation research focused on aquatic ecosystems. Some of the Center's projects include "The Chesapeake Bay Initiative," tracking mercury levels through the food chain in wild and captive bottlenose dolphins, and assessing chronic natural resource damages from the BP oil spill in the Gulf of Mexico.

In 2011, The National Aquarium was honored with the Maryland Green Registry Leadership Award, as an organization that shows “a strong commitment to sustainable practices, measurable results, and continuous improvement” and was recognized by the Baltimore Business Journal and Smart CEO Magazine for exceptional green business practices in 2009.

A 4.3 MW solar farm in Cambridge supplies about 40% of the power for the National Aquarium, and saves about 1,300 metric tons of carbon dioxide during the summer. Energy efficiency upgrades in 2015 saved an additional 3,200 tons of CO2 over the summer. 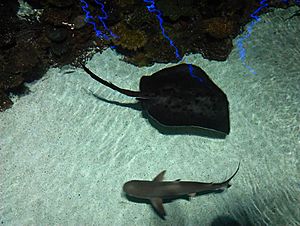 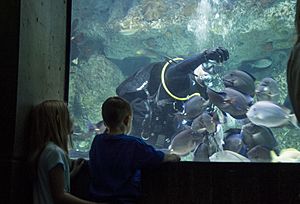 A diver feeding in a tank 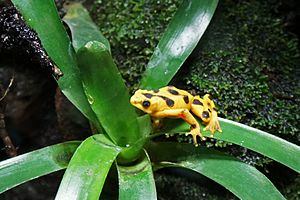 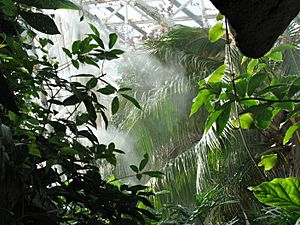 Rainforest located at the top of Pier 3 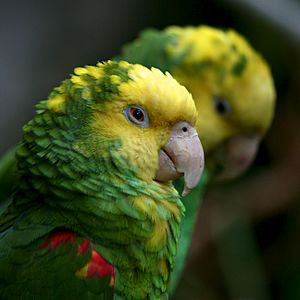 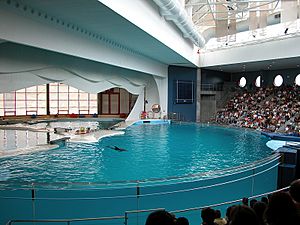 The Marine Mammal Pavilion on Pier 4 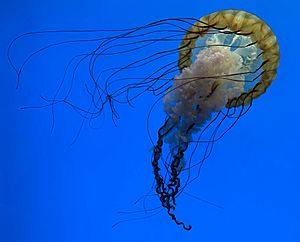 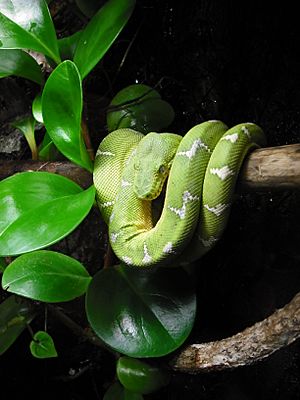 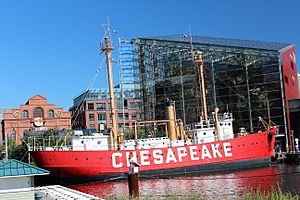 This building contains five levels or floors that are accessible via escalator and elevator except to guests with strollers. Guests with toddlers must carry them on their person. Each floor possesses several exhibits that communicate a main theme. This building also houses two large tanks, one of which simulates an Atlantic coral reef, and one of which simulates the open ocean.

Originally, it was a marine mammal exhibit that had bottlenose dolphins from the Gulf of Mexico and beluga whales, but when Pier 4 opened, the animals were moved there. Subsequently, that area became an exhibit called Wings in the Water – which included cownose rays, southern stingrays, roughtail stingrays, pelagic stingrays, 2 zebra sharks, and Calypso the turtle until 2013, when it became Blacktip Reef. This 265,000-US-gallon (1,000,000 l) habitat, replicating an Indo-Pacific reef landscape (living corals are exhibited elsewhere in the National Aquarium), can be seen from many vantage points, including a new floor-to-ceiling pop-out viewing window. It contains 65–70 species, mostly fish (including blacktip reef shark and Zebra shark). One of the largest animals in the exhibit was Calypso, a 500-pound green sea turtle that was rescued off the shore of Long Island in 2000. Her left front flipper had become infected and required amputation in order to save her life. Calypso was introduced into Blacktip Reef in July 2013, and died in February 2020.

Level 2: Maryland: Mountains to the Sea

This level features animals that are native to Maryland. The four exhibits create the illusion that the viewer is traveling down a Maryland stream from its source in the Allegheny Mountains, to a tidal marsh, to a coastal beach, and finally ending at the Atlantic shelf. Featured animals include painted turtle, wood turtle, American bullfrog, and rosyside dace in the Allegheny Stream, diamondback terrapin, feather blenny, and sheepshead minnow in the Tidal Marsh, striped burrfish and blue crab on the Coastal Beach, and clearnose skate, Grouper and summer flounder in the Atlantic Shelf exhibit.

This level features fish that possess adaptations that are needed to survive in their various environments. For example, the electric eel has the rare ability to shock its prey with electricity. Featured animals include electric eel, chambered nautilus, and giant Pacific octopus.

This level simulates the Amazon rainforest, and includes two elevated platforms for bird-watching and a cave of various glass-enclosed displays of reptiles, amphibians, and terrestrial arthropods. Featured Animals Include:

This large 335,000-US-gallon (1,270,000 l) exhibit replicates the Atlantic coral reef, and is filled with more than 500 exotic species that would be found anywhere from closer to shore to out into the trench and open ocean, including a green moray eel, Atlantic tarpon, Southern stingray, Cownose Ray, triggerfish, black grouper, bonnethead sharks, a blacknose shark and porcupine fish. Originally it also had a barracuda.

This smaller building, opened in 1990, features the marine mammal exhibit, which is home to Atlantic bottlenose dolphins in a 1,300,000-US-gallon (4,900,000 l) facility. It also holds a temporary exhibit on assorted jellyfish called "Jellies Invasion: Oceans Out of Balance".

This exhibit houses the aquarium's six bottlenose dolphins. Guests can watch training, feeding, and play times with the dolphins and interact with dolphin experts.

The dolphin colony consists of two males (Foster, Beau) and four females (Spirit, Chesapeake, Bayley, Jade), the youngest being Bayley, 2008. Chesapeake was the first dolphin born at the aquarium in 1992.

These will be the last dolphins housed at the Aquarium. In June 2016, the National Aquarium announced plans to construct a sanctuary in Florida or the Caribbean for its colony of bottlenose dolphins. The new sanctuary will be roughly between 50 to 100 times the size of the current dolphin exhibit. "The sanctuary would be the first of its kind in North America and will provide the dolphins with a protected, seaside habitat, creating a new option for how dolphins can thrive in human care,” according to the Aquarium's website. The Aquarium aims to move the dolphins to this sanctuary by 2023.

Jellies Invasion: Oceans Out of Balance

This temporary exhibit in the Pier 4 Pavilion building showcases nine different species of jellyfish, and also illustrates how these animals are important bioindicators, which means that they are sensitive to changes within their environment, and therefore, serve as an early warning sign that changes are occurring within an ecosystem, whether from pollution, invasive species, climate change, or other factors.

In 2016, Architect Jeanne Gang made a proposal to the national aquarium to transform Pier 4 into a Chesapeake bay themed exhibit to replace the Jellyfish and Dolphin Exhibits. Even though details are sparse about this potential initiative, The new exhibits would include Waterfall, Watershed, Lily pond, Saltmarsh, Freshwater Tidal, River and an Open bay exhibit. Other parts of this plan include the creation of a "wetland" in between the two buildings and the transformation of Pier 3 into a collection of "hope spots" bringing the aquarium to 360,000 sq ft (33,000 m2) of space in total.

Like the Upland Tropical Rain Forest exhibit, this exhibit is structured like a large walk-in aviary, and allows many of the flying animals to roam freely throughout the exhibit. The exhibit represents a river gorge in Australia, and contains many pools in which Australian aquatic life can be found. It is designed to show the wild extremes faced by this particular part of Australia: fire, drought and flood. Guests can see more than 1,800 individual native animals including freshwater crocodiles, turtles, free-flying birds, snakes, lizards, and flying foxes.

Inside the expanded portion of the Aquarium, directly in the main entrance, is a 35-foot (11 m) waterfall that was modeled from an actual waterfall in a Maryland state park. The prominent display is also visible from outside the Aquarium. Also inside the expanded portion is a recreation of an Australian habitat. The Umbrawarra Gorge of Australia is carefully depicted inside the upper portion of the expanded building, and the exhibit depicts lands of fire, drought, and flood. Aboriginal artwork, based on actual work discovered in Australia, is also found in the gorge exhibit. These images depict aboriginal interpretations of the land that they live on.

and freshwater stingrays now in another aquarium

Under the terms of its management agreement with the City, the non-profit corporation strives to remain self-supporting for operations. Details regarding funding, staffing, and programming are made available to the public within each year's annual report downloadable on the National Aquarium Institute's website.

All content from Kiddle encyclopedia articles (including the article images and facts) can be freely used under Attribution-ShareAlike license, unless stated otherwise. Cite this article:
National Aquarium (Baltimore) Facts for Kids. Kiddle Encyclopedia.