The conservation status of both species has not been determined, but bycatch and hunting are modern threats to one or both species. 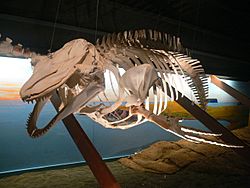 Pilot whales are mostly dark grey, brown, or black, but have some light areas such as a grey saddle patch behind the dorsal fin. Other light areas are an anchor-shaped patch under the chin, a faint blaze marking behind the eye, a large marking on the belly, and a genital patch. The dorsal fin is set forward on the back and sweeps backwards. A pilot whale is more robust than most dolphins, and has a distinctive large, bulbous melon. Pilot whales' long, sickle-shaped flippers and tail stocks are flattened from side to side. Male long-finned pilot whales develop more circular melons than females, although this does not seem to be the case for short-finned pilot whales off the Pacific coast of Japan. 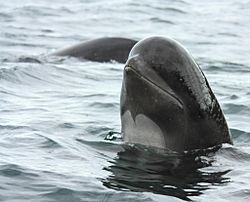 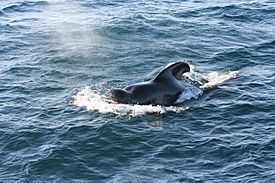 Pilot whale in the Gulf of California

Pilot whales can be found in oceans nearly worldwide, but data about current population sizes is deficient. The long-finned pilot whale prefers slightly cooler waters than the short-finned, and is divided into two populations. The smaller group is found in a circumpolar band in the Southern Ocean from about 20 to 65°S. It may be sighted off the coasts of Chile, Argentina, South Africa, Australia, and New Zealand. An estimated more than 200,000 individuals were in this population in 2006. The second, much larger, population inhabits the North Atlantic Ocean, in a band from South Carolina in the United States across to the Azores and Morocco at its southern edge and from Newfoundland to Greenland, Iceland, and northern Norway at its northern limit. This population was estimated at 778,000 individuals in 1989. It is also present in the western half of the Mediterranean Sea.

The short-finned pilot whale is less populous. It is found in temperate and tropical waters of the Indian, Atlantic and Pacific Oceans. Its population overlaps slightly with the long-finned pilot whale in the temperate waters of the North Atlantic and Southern Oceans. About 150,000 individuals are found in the eastern tropical Pacific Ocean. More than 30,000 animals are estimated in the western Pacific, off the coast of Japan. Pilot whales are generally nomadic, but some populations stay year-round in places such as Hawaii and parts of California. They prefer the waters of the shelf break and slope. Once commonly seen off of Southern California, short-finned pilot whales disappeared from the area after a strong El Niño year in the early 1980s, according to the National Oceanic and Atmospheric Administration. In October 2014, crew and passengers on several boats spotted a pod of 50–200 off Dana Point, California. 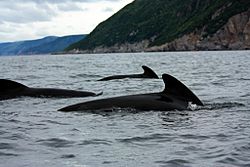 Both species eat primarily squid. The whales make seasonal inshore and offshore movements in response to the dispersal of their prey. Fish that are consumed include Atlantic cod, Greenland turbot, Atlantic mackerel, Atlantic herring, hake, and spiny dogfish in the northwest Atlantic. In the Faroe Islands, whales mostly eat squid, but will also eat fish species such as greater argentine and blue whiting. However, Faroe whales do not seem to feed on cod, herring, or mackerel even when they are abundant.

Pilot whales generally take several breaths before diving for a few minutes. Feeding dives may last over ten minutes. They are capable of diving to depths of 600 meters, but most dives are to a depth of 30–60 m. Shallow dives tend to take place during the day, while deeper ones take place at night. When making deep dives, pilot whales often make fast sprints to catch fast-moving prey such as squid.

Compared to sperm whales and beaked whales, foraging short-finned pilot whales are more energetic at the same depth. When they reach the end of their dives, pilot whales will sprint, possibly to catch prey, and then make a few buzzes. This is unusual considering deep-diving, breath-holding animals would be expected to swim slowly to conserve oxygen. The animal's high metabolism possibly allows it to sprint at deep depths, which would also give it shorter diving periods than some other marine mammals. This may also be the case for long-finned pilot whales.

Pilot whales are often infested with whale lice, cestodes, and nematodes. They also can be hosts to various pathogenic bacteria and viruses, such as Streptococcus, Pseudomonas, Escherichia, Staphylococcus, and influenza. One sample of Newfoundland pilot whales found the most common illness was an upper respiratory tract infection. 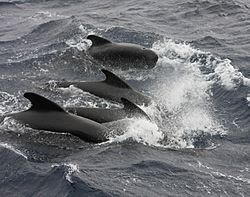 Both species live in groups of 10–30, but some groups may number 100 or more. Data suggest the social structures of pilot whale pods are similar to those of "resident" killer whales. The pods are highly stable and the members have close matrilineal relationships. Pod members are of various age and sex classes, although adult females tend to outnumber adult males. They have been observed making various kin-directed behaviors, such as providing food. Numerous pods will temporarily gather, perhaps to allow individuals from different pods to interact and mate, as well as provide protection.

Both species are loosely polygynous. Data suggest both males and females remain in their mother's pod for life; despite this, inbreeding within a pod does not seem to occur. During aggregations, males will temporarily leave their pods to mate with females from other pods. Male reproductive dominance or competition for mates does not seem to exist. After mating, a male pilot whale usually spends only a few months with a female, and an individual may sire several offspring in the same pod. Males return to their own pods when the aggregations disband, and their presence may contribute to the survival of the other pod members. No evidence of "bachelor" groups has been found. 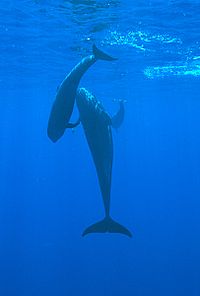 Pilot whales emit echolocation clicks for foraging and whistles and burst pulses as social signals (e.g. to keep contact with members of their pod). With active behavior, vocalizations are more complex, while less-active behavior is accompanied by simple vocalizations. Differences have been found in the calls of the two species. Compared with short-finned pilot whales, long-finned pilot whales have relatively low-frequency calls with narrow frequency ranges. In one study of North Atlantic long-finned pilot whales, certain vocalizations were heard to accompany certain behaviors. When resting or "milling", simple whistles are emitted. Surfacing behavior is accompanied by more complex whistles and pulsed sounds. The number of whistles made increases with the number of subgroups and the distance in which the whales are spread apart. 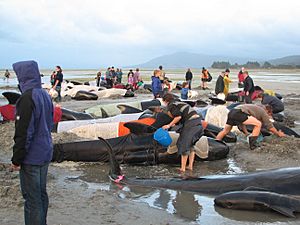 A study of short-finned pilot whales off the southwest coast of Tenerife in the Canary Islands has found the members of a pod maintained contact with each other through call repertoires unique to their pod. A later study found, when foraging at around 800 m deep, short-finned pilot whales make tonal calls. The number and length of the calls seem to decrease with depth despite being farther away from conspecifics at the surface. As such, the surrounding water pressure affects the energy of the calls, but it does not appear to affect the frequency levels.

When in stressful situations, pilot whales produce "shrills" or "plaintive cries", which are variations of their whistles. 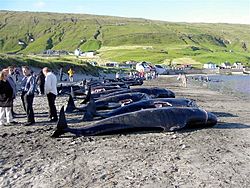 The long-finned pilot whale has traditionally been hunted by "driving", which involves many hunters and boats gathering in a semicircle behind a pod of whales close to shore, and slowly driving them towards a bay, where they become stranded and are then slaughtered. This practice was common in both the 19th and 20th centuries. At the Faroe Islands, pilot whale hunting started at least in the 16th century, and continued into the modern times, as thousands were killed during the 1970s and 1980s. In other parts of the North Atlantic, such as Norway, West Greenland, Ireland and Cape Cod, pilot whales have also been hunted, but to a lesser extent. Iceland,. One fishery at Cape Cod harvested 2,000–3,000 whales per year during the late 19th and early 20th centuries. Newfoundland's long-finned pilot whale fishery was at its highest in 1956, but declined shortly after and is now defunct. In the Southern Hemisphere, exploitation of long-finned pilot whales has been sporadic and low. Currently, long-finned pilot whales are only hunted at the Faroe Islands and Greenland.

According to the IUCN the harvesting of this species for food in the Faroe Islands and Greenland is probably sustainable.

The short-finned pilot whale has also been hunted for many centuries, particularly by Japanese whalers. Between 1948 and 1980, hundreds of whales were exploited at Hokkaido and Sanriku in the north and Taiji, Izu, and Okinawa in the south. These fisheries were at their highest in the late 1940s and early 1950s; 2,326 short-finned pilot whales were harvested in the mid- to late 1980s. This had decreased to about 400 per year by the 1990s.

Pilot whales have also fallen victim to bycatches. In one year, around 30 short-finned pilot whales were caught by the squid round-haul fishery in southern California. Likewise, California's drift gill net fishery took around 20 whales a year in the mid-1990s. In 1988, 141 whales caught on the east coast of the U.S. were taken by the foreign Atlantic mackerel fishery, which forced it to be shut down.

As with other marine mammals, pilot whales are susceptible to certain pollutants. Off the Faroes, France, the UK, and the eastern US, pilot whales were found to have been contaminated with high amounts of DDT and PCB. The Faroes whales have also been contaminated with cadmium and mercury. However, pilot whales from Newfoundland and Tasmania were found to have had very low levels of DDT. Short-finned pilot whales off the west coast of the US have had high amounts of DDT and PCB in contrast to the low amounts found in whales from Japan and the Antilles. 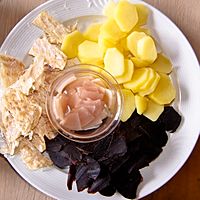 Pilot whale meat is available for consumption in very few areas of Japan, mainly along the central Pacific coast, and also in other areas of the world, such as the Faroe Islands. The meat is high in protein (higher than beef) and low in fat. Because a whale's fat is contained in the layer of blubber beneath the skin, and the muscle is high in myoglobin, the meat is a dark shade of red. In Japan, where pilot whale meat can be found in certain restaurants and izakayas, the meat is sometimes served raw, as sashimi, but just as often pilot whale steaks are marinated, cut into small chunks, and grilled. When grilled, the meat is slightly flaky and quite flavorful, somewhat gamey, though similar to a quality cut of beef, with distinct yet subtle undertones recalling its marine origin.

In both Japan and the Faroe Islands, the meat is contaminated with mercury and cadmium, causing a health risk for those who frequently eat it, especially children and pregnant women. 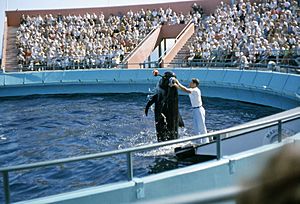 Bubbles, the pilot whale, performing at Marineland of the Pacific, 1962

All content from Kiddle encyclopedia articles (including the article images and facts) can be freely used under Attribution-ShareAlike license, unless stated otherwise. Cite this article:
Pilot whale Facts for Kids. Kiddle Encyclopedia.