SeaWorld San Diego is a member of the Association of Zoos and Aquariums (AZA). Adjacent to the property is the Hubbs-SeaWorld Research Institute, which conducts research on marine biology and provides education and outreach on marine issues to the general public, including information in park exhibits. 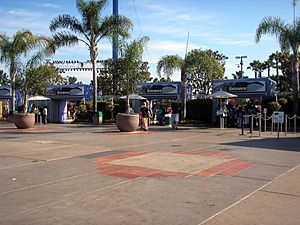 SeaWorld was founded on March 21, 1964 by four graduates of the University of California, Los Angeles. Although their original idea of an underwater restaurant was not feasible at the time, the idea was expanded into a 22-acre (8.9 ha) marine zoological park along the shore of Mission Bay in San Diego. After an investment of about $1.5 million, the park opened with 45 employees, several dolphins, sea lions and two seawater aquariums, and hosted more than 400,000 visitors in its first year of operation.

Initially held as a private partnership, SeaWorld offered its stock publicly in 1968 enabling it to expand and open additional parks. The second SeaWorld location, SeaWorld Ohio, opened in 1970, followed by SeaWorld Orlando in 1973 and SeaWorld San Antonio (the largest of the parks) in 1988. The partnership later sold SeaWorld Ohio to Six Flags in January 2001. Harcourt Brace Jovanovich owned the parks between 1976 and 1989, when Anheuser-Busch Companies, Inc. purchased them. After InBev acquired Anheuser-Busch, it sold SeaWorld San Diego and the rest of the company's theme parks to the Blackstone Group in December 2009, which operates the park through its SeaWorld Parks & Entertainment division.

The park has been closed since mid-March 2020 because of the COVID-19 pandemic. 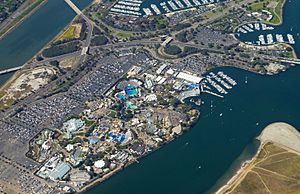 Many of SeaWorld's shows are seasonal and may change based on the time of year.

Bayside Skyride is a 1967 VonRoll type 101 gondola ride located in the northwest corner of the park behind the Bayside Amphitheater. It travels over Perez Cove for a 6-minute ride on two 80-foot (24 m) towers and lands on the other side before returning for a full loop. Bayside Skyride has the longest span between towers out of any VonRoll Skyride ever built—925 feet (282 m). From 1967 to 1988, the Skyride was known as the Sea World Atlantis Skyride and took riders to the Sea World Atlantis Restaurant which was located on the opposite end of the ride across the lagoon. After the restaurant closed, the ride remained, but took riders on a full loop, passing through the second station instead of stopping.

Ocean Explorer is a kids realm that opened on May 27, 2017. The area includes four rides: Aqua Scout, a ride that bounces in mini submarines, Octarock, a swing that rocks back and forth, Sea Dragon Drop, a child size drop tower and Tentacle Twirl, a jellyfish-themed wave swing ride.

Located outside Turtle Reef, Riptide Rescue is a spinning flat ride, with the vehicles being themed to SeaWorld's rescue boats.

Sesame Street's Bay of Play is an interactive children's play area that opened in 2008 and is based on the long running Sesame Street children's television series. The area includes three rides: Abby's Seastar Spin, a spinning "teacup" attraction, Elmo's Flying Fish, an attraction in the style of Dumbo the Flying Elephant" and Oscar's Rockin' Eel, an eel themed "Tug Boat" ride.

Shipwreck Rapids is an Intamin river rapids ride themed to a shipwreck on a deserted island. At one point riders pass by a sea turtle exhibit. There is also a point where riders go underneath a waterfall into a cavern. 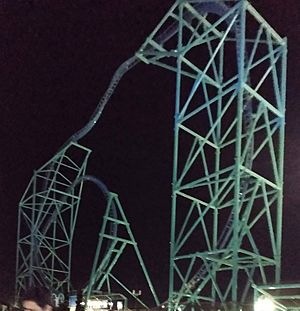 Journey to Atlantis is a Mack Rides water coaster that was built in 2004. The ride stands at a height of 95 feet (29 m) and contains three drops and an elevator lift. In addition, the ride hits a max speed of 42 miles per hour (68 km/h).

On May 26, 2012, SeaWorld San Diego opened a new mega-attraction called Manta, a Mack launched roller coaster featuring two launches LSM of up to 43 miles per hour (69 km/h) accompanied by a bat ray aquarium and touch pool. A shallow pool for touching bat rays, white sturgeons, and shovelnose guitarfish lies at the entrance of the attraction while two-sided underground aquarium (for riders and nonriders) can be accessed downstairs or via the queue. Manta begins with 270 degree projected media experience at the first launch. The train rocks forward and backward in synchronization with the projected film of a coral reef and school of rays. The two-minute, 2,800-foot (850 m) long ride stands at a height of 30 feet (9.1 m) and features a drop of 54 feet (16 m). The layout is characterized by multiple turns, short but sudden drops and crossovers. 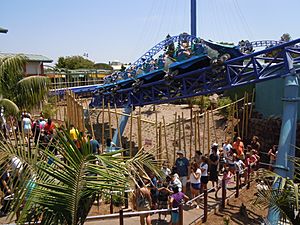 SeaWorld San Diego is home to three aquariums. Each aquarium houses different types of aquatic animals, both fresh and saltwater.

Octopus Aquarium: This aquarium is home to a variety of cephalopods, including various specious of octopus, cuttlefish and nautilus.

Ray Aquarium: Located adjacent to Journey to Atlantis, this aquarium features a variety of rays and fishes. 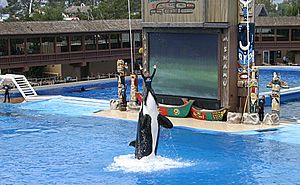 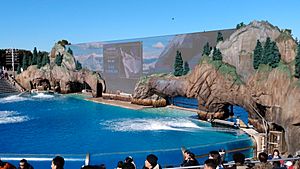 SeaWorld's Wild Arctic is home to various species of cold water animals, including beluga whales and different species of pinnipeds. 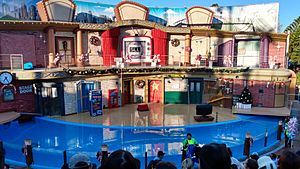 SeaWorld Entertainment purchased one of the Cedar Fair-owned "Knott's Soak City" water parks in late 2012. In 2013, the water park opened as Aquatica San Diego. The park is located approximately 23 mi (37 km) southeast of its sister SeaWorld park, in Chula Vista, California. The park features 26 slides. On October 21, 2019, SeaWorld Entertainment announced that Aquatica San Diego would be converted into Sesame Place, the first Sesame Place theme park on the West Coast. Aquatica never had their final season in 2020 before closing and will be reopened as Sesame Place in 2022. The new park will retain some water park attractions and integrate them into the new park.

All content from Kiddle encyclopedia articles (including the article images and facts) can be freely used under Attribution-ShareAlike license, unless stated otherwise. Cite this article:
SeaWorld San Diego Facts for Kids. Kiddle Encyclopedia.