SeaWorld Orlando originally announced plans to build a water park on July 15, 2005. The announcement stated that it would be a "natural" park and revealed the park's iconic Dolphin Plunge water slides. On March 5, 2007, SeaWorld held a press conference officially announcing Aquatica. It was expected the 59-acre (24 ha) park would cost US$50 million to build. Construction continued in earnest throughout 2007 and into early 2008. Previews for employees and holders of park annual passes were held in February. On March 1, 2008, the park opened to guests for the first time, with the official grand opening held on April 4, 2008. In its debut year, the park hosted approximately 950,000 guests, making it the fourth-most visited water park in the United States and eighth-most visited in the world. The park was an immediate success, reaching its opening-year attendance goal in just six months.

In early 2011, rumors speculated about Aquatica coming to SeaWorld San Antonio in the future. According to the park president, SeaWorld San Antonio would become a multi-day experience. SeaWorld officially announced plans to build a water park on May 24, 2011. The announcement called it, "a whimsical waterpark with up-close animal experiences, high-speed thrills and relaxing, sandy beaches". The water park replaced Lost Lagoon that opened in the early 1990s. Lost Lagoon closed on Labor Day weekend 2011. During October 2011 the construction of the new water park started with excavation for the new entrance, the new sandy beaches and the structure for the new Wahalla Wave water slide. In early November 2011 the new water slides arrived in pieces at Sea World San Antonio's parking lot, waiting to get assembled. Aquatica San Antonio officially opened on May 19, 2012.

On November 20, 2012, Cedar Fair announced it had sold its San Diego Soak City park to SeaWorld Parks & Entertainment. The water park originally opened on May 31, 1997, under the name White Water Canyon. At the time it featured 16 water slides and a wave pool. In December 1999, Cedar Fair purchased the park for $11.5 million and renamed it Knott's Soak City U.S.A.. The water park had opened with a new beach theme in May 2000. The acquisition by SeaWorld Parks & Entertainment saw the park transformed into a 32-acre (13 ha) water park named Aquatica San Diego. The refurbished park reopened on June 1, 2013.

In mid-March 2020, all Aquatica parks were shut down caused by the COVID-19 pandemic. While Orlando & San Antonio have reopened theirs in June, only San Diego remains indefinitely closed.

Aquatica Orlando is located in Orlando, Florida. It is a sister park of SeaWorld Orlando and Discovery Cove. The park is themed to the southern Pacific, and features Australian and New Zealand based mascots including Roa (a kiwi), Kata (a kookaburra), Wai (a Commerson's dolphin), Ihu (a gecko), Papa (a royal spoonbill), Wae Wae (a takahe), and Motu (a turtle). The park features a wide array of attractions for all ages and swimming abilities, some of which pass by or through animal habitats. The park has two wave pools which share an extensive, 80,000-square-foot (7,400 m2) man made white-sand beach area equipped with deck chairs, sun beds and umbrellas. 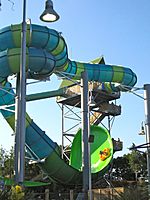 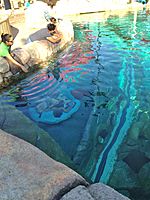 Aquatica San Antonio is located in San Antonio, Texas. The water park opened on May 19, 2012, and is a companion to SeaWorld San Antonio. It features a wide array of attractions for all ages and swimming abilities, some of which pass by or through animal habitats.

In 2014, Aquatica San Antonio opened Roa's Aviary which is in the middle of Loggerhead Lane (similar to Tassie's Twister in Orlando). The aviary has a waterfall entrance to prevent birds from getting out. The 34,000 square foot facility features multiple species of birds.

The former Knott's Soak City San Diego in Chula Vista, California reopened as Aquatica San Diego on June 1, 2013. It features a wide array of attractions for all ages and swimming abilities, one of which passes by a flamingo habitat. The water park was featured on the episode, "Appalachian Splashin" on Xtreme Waterparks. Aquatica San Diego will be rethemed to Sesame Place San Diego for the 2022 season.

Originally scheduled for 2021, Aquatica San Diego will be re-branded as Sesame Place San Diego in 2022. The Sesame Street-themed park will feature tame roller coasters, carousels and other family friendly rides, the street made famous on TV, a parade, live shows and character interactions, among other things. The new park will incorporate many of the existing water attractions into the new park, particularly those that are appropriate for younger children. For now, the only existing Aquatica slide targeted for removal is HooRoo Run, which has an 80-foot drop.

All content from Kiddle encyclopedia articles (including the article images and facts) can be freely used under Attribution-ShareAlike license, unless stated otherwise. Cite this article:
Aquatica (water parks) Facts for Kids. Kiddle Encyclopedia.