Kiwi or kiwis are flightless birds native to New Zealand. Approximately the size of a domestic chicken, kiwi are by far the smallest living ratites (which also consist of ostriches, emus, rheas, and cassowaries).

DNA sequence comparisons have yielded the surprising conclusion that kiwi are closely related to the extinct Malagasy elephant birds with which they shared New Zealand. There are five recognised species, four of which are currently listed as vulnerable, and one of which is near-threatened. All species have been negatively affected by historic deforestation but currently the remaining large areas of their forest habitat are well protected in reserves and national parks.

The kiwi's egg is one of the largest in proportion to body size (up to 20% of the female's weight) of any species of bird in the world. Other unique adaptations of kiwi, such as their hairlike feathers, short and stout legs, and using their nostrils at the end of their long beak to detect prey before they ever see it, have helped the bird to become internationally well-known.

The kiwi is recognised as an icon of New Zealand, and the association is so strong that the term Kiwi is used internationally as the term for New Zealanders.

There are five known species of kiwi, as well as a number of subspecies. 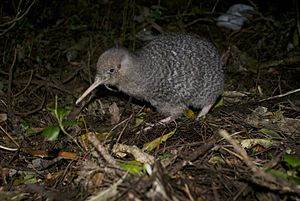 Kiwis are night (nocturnal) birds. They mostly eat invertebrates, like worms and insects. Kiwis keep a territory where they live alone or with their mate. In their territory they build several small caves where they sleep, or lay their eggs.

Female kiwis lay 1-3 eggs. Kiwis are mature when they are 2 years old, and they can live more than 20 years. One kiwi kept in a zoo reached 35 years old. 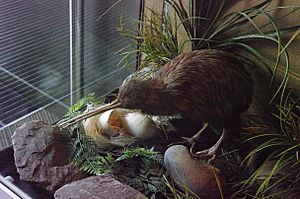 The eye of the kiwi is the smallest relative to body mass in all avian species resulting in the smallest visual field as well. The eye has small specialisations for a nocturnal lifestyle, but kiwi rely more heavily on their other senses (auditory, olfactory, and somatosensory system). The sight of the kiwi is so underdeveloped that blind specimens have been observed in nature, showing how little they rely on sight for survival and foraging. 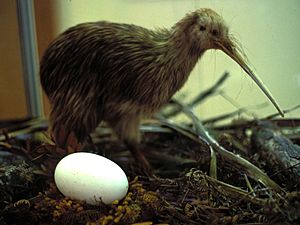 Kiwi with egg in the Kauri Museum, New Zealand

The female brown Kiwi lays enormous eggs, which are almost one-sixth of her own body weight. These eggs take 11 weeks to incubate, the longest time for any bird. In comparison, Yellow-breasted Chats' eggs take only 11 days, and chickens' eggs take 21 days. 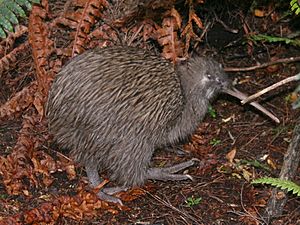 Kiwis prefer to live in burrows they make in forested areas. They make their burrows in the ground like rabbits, or in between the roots of trees or in places such as hollow logs. Kiwi line their burrows with leaves to make them more comfortable and warm. Sometimes they hide the entrance to their burrows using piles of twigs. Kiwis may have more than ten different burrows in their territory and will swap between them sometimes.

Kiwis are threatened by many mammals. Stoats are the main threat for the Kiwi chicks. Ferrets and dogs kill adult Kiwis. 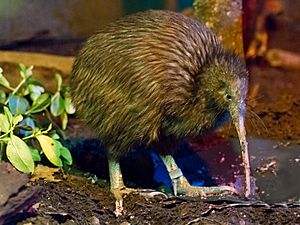 In 2000, the Department of Conservation set up five kiwi sanctuaries focused on developing methods to protect kiwi and to increase their numbers. There are three kiwi sanctuaries in the North Island and two in the South Island:

A number of other mainland conservation islands and fenced sanctuaries have significant populations of kiwi, including: 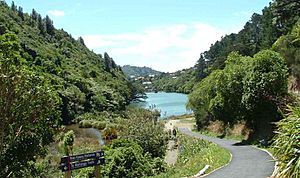 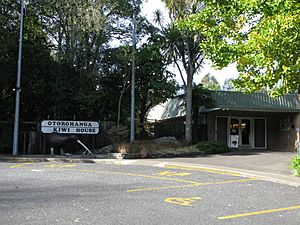 North island brown kiwi were introduced to the Cape Sanctuary in Hawke's Bay between 2008 and 2011, which in turn provided captive-raised chicks that were released back into Maungataniwha Native Forest.

In 1851, London Zoo became the first zoo to keep kiwi. The first captive breeding took place in 1945. As of 2007 only 13 zoos outside New Zealand hold kiwi. The Frankfurt Zoo has 12, the Berlin Zoo has seven, Walsrode Bird Park has one, the Avifauna Bird Park in the Netherlands has three, the San Diego Zoo has five, the San Diego Zoo Safari Park has one, the National Zoo in Washington, DC has eleven, the Smithsonian Conservation Biology Institute has one, and the Columbus Zoo and Aquarium has three.

As a national symbol 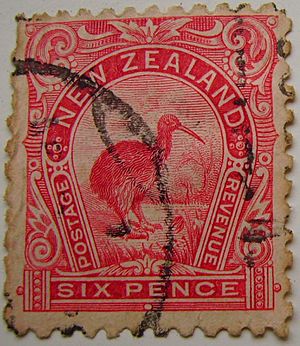 The kiwi on an 1898 New Zealand stamp

The kiwi as a symbol first appeared in the late 19th century in New Zealand regimental badges. It was later featured in the badges of the South Canterbury Battalion in 1886 and the Hastings Rifle Volunteers in 1887. Soon after, the kiwi appeared in many military badges; and in 1906, when Kiwi Shoe Polish was widely sold in the UK and the US, the symbol became more widely known.

During the First World War, the name "kiwi" for New Zealand soldiers came into general use, and a giant kiwi (now known as the Bulford kiwi), was carved on the chalk hill above Sling Camp in England. Usage has become so widespread that all New Zealanders overseas and at home are now commonly referred to as "Kiwis". 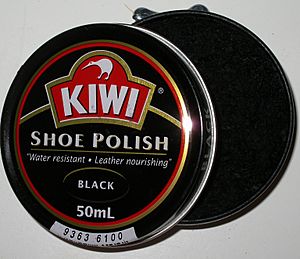 The kiwi has since become the most well-known national symbol for New Zealand, and the bird is prominent in the coat of arms, crests and badges of many New Zealand cities, clubs and organisations; at the national level, the red silhouette of a kiwi is in the centre of the roundel of the Royal New Zealand Air Force.

Maori relationship with the kiwi

The Māori traditionally believed that kiwi were under the protection of Tane Mahuta, god of the forest. They were used as food and their feathers were used for kahu kiwi (ceremonial cloaks). Today, while kiwi feathers are still used, they are gathered from birds that die naturally, through road accidents, predation, or from captive birds. Kiwi are no longer hunted and some Māori consider themselves the birds' guardians.

All content from Kiddle encyclopedia articles (including the article images and facts) can be freely used under Attribution-ShareAlike license, unless stated otherwise. Cite this article:
Kiwi Facts for Kids. Kiddle Encyclopedia.