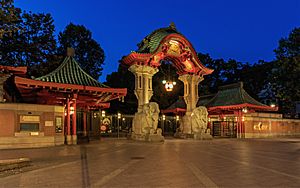 Elephant Gate entrance on the Olof Palme Platz in 2017

The Berlin Zoological Garden is the largest zoo in the world in acreage (84 acres in 2013) and in number of species (1,500 in 2013). It holds the most comprehensive collection of species in the world. There were 19,000 plus individual animals in the zoo in 2013.

The zoo opened in 1844. It was the first Zoo to be built in Germany, and is perhaps the most visited in Europe. It is located in the southwestern section of the Tiergarten. It was the home of the famous baby polar bear Knut.

Several architects have created the houses for the different species in the zoo. The Antelope House dates to 1872 and the Elephant House to 1873. The Hippopotamus House dates to 1997. It demonstrates the application of modern zoo concepts to a particular species. The hippos live under a roof of 13,000 square feet of glass solar panel. They can now be seen above and beneath the water.

During World War II, the elephants at the Zoo were killed in the air raids of September 7-8, 1941. Zoo officials also killed animals at the time. In November 1943, more than 1,000 bombs were dropped over the zoo, destroying many buildings and burning to death many animals. As many as 12,000 animals were killed in the Berlin Zoological Garden during the bombings of World War II.

All content from Kiddle encyclopedia articles (including the article images and facts) can be freely used under Attribution-ShareAlike license, unless stated otherwise. Cite this article:
Berlin Zoological Garden Facts for Kids. Kiddle Encyclopedia.