Knut (5 December 2006 – 19 March 2011) was an orphaned polar bear born in captivity at the Berlin Zoological Garden. Rejected by his mother at birth, he was raised by zookeepers.

He was the first polar bear cub to survive past infancy at the Berlin Zoo in more than 30 years. At one time the subject of international controversy, he became a tourist attraction and commercial success. After the German tabloid newspaper Bild ran a quote from an animal rights activist that criticized keeping the cub in captivity, fans worldwide rallied in support of his being hand-raised by humans. Children protested outside the zoo, and e-mails and letters expressing sympathy for the cub's life were sent from around the world.

Knut became the center of a mass media phenomenon dubbed "Knutmania" that spanned the globe and spawned toys, media specials, DVDs, and books. Because of this, the cub was largely responsible for a significant increase in revenue, estimated at about €5 million, at the Berlin Zoo in 2007. Attendance figures for the year increased by an estimated 30 percent, making it the most profitable year in its 163-year history. 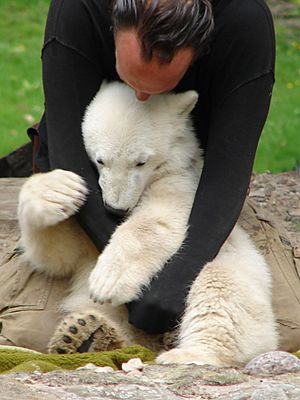 Thomas Dörflein playing with Knut in May 2007

Knut was born at the Berlin Zoo to 20-year-old Tosca, a former circus performer from East Germany who was born in Canada, and her 13-year-old mate Lars, who was originally from the Tierpark Hellabrunn in Munich. After an uncomplicated gestation, Knut and his unnamed brother were born on 5 December 2006. Tosca rejected her cubs for unknown reasons, abandoning them on a rock in the polar bear enclosure.

Zookeepers rescued the cubs by scooping them out of the enclosure with an extended fishing net, but Knut's brother died of an infection four days later. Knut was the first polar bear to have been born and survive in the Berlin Zoo in over 30 years. Only the size of a guinea pig, he spent the first 44 days of his life in an incubator before zookeeper Thomas Dörflein began raising the cub.

Knut's need for round-the-clock care required that Dörflein not only sleep on a mattress next to Knut's sleeping crate at night, but also play with, bathe, and feed the cub daily. Knut's diet began with a bottle of baby formula mixed with cod liver oil every two hours, before graduating at the age of four months to a milk porridge mixed with cat food and vitamins.

Dörflein also accompanied Knut on his twice-daily one-hour shows for the public and therefore appeared in many videos and photographs alongside the cub. As a result, Dörflein became a minor celebrity in Germany and was awarded Berlin's Medal of Merit in honour of his continuous care for the cub. Dörflein died of a heart attack on 22 September 2008, he was 44 years old. 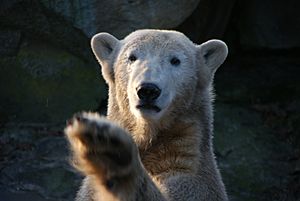 Polar bear Knut at the age of 2 years

On 19 March 2011, at the age of four, Knut collapsed and died in his enclosure after he became agitated and falling backwards into the pool. His sudden death caused an international outpouring of grief. Hundreds of fans visited the zoo after the bear's death, leaving flowers and mementos near the enclosure. The mayor of Berlin, Klaus Wowereit, stated "We all held him so dearly. He was the star of the Berlin zoos."

In January 2014, Knut's full autopsy results were published by the Leibniz Institute for Zoo and Wildlife Research in the Journal of Comparative Pathology. It was the most in-depth post-mortem ever carried out on an animal. The autopsy revealed that the damage to the bear’s brain was so severe that even if he had not fallen into the water and drowned he would have died anyway.

Experts hypothesized that he was suffering from a virus that caused the encephalitis. In August 2015, it was discovered that Knut died of Anti-NMDA receptor encephalitis. This was the first case discovered in non human animals.

All content from Kiddle encyclopedia articles (including the article images and facts) can be freely used under Attribution-ShareAlike license, unless stated otherwise. Cite this article:
Knut (polar bear) Facts for Kids. Kiddle Encyclopedia.