The Arctic wolf (Canis lupus arctos), also known as the white wolf or polar wolf, is a subspecies of grey wolf native to Canada's Queen Elizabeth Islands, from Melville Island to Ellesmere Island. It is a medium-sized subspecies, distinguished from the northwestern wolf by its smaller size, its whiter colouration, its narrower braincase, and larger carnassials. Since 1930, there has been a progressive reduction in size in Arctic wolf skulls, which is likely the result of wolf-dog hybridization. 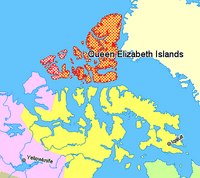 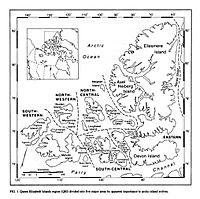 In 1935, the British zoologist Reginald Pocock attributed the subspecies name Canis lupus arctos (Arctic wolf) to a specimen from Melville Island in the Queen Elizabeth Islands, Canada. He wrote that similar wolves could be found on Ellesmere Island. He also attributed the name Canis lupus orion to a Greenland wolf specimen from Cape York, northwest Greenland. Both wolves are recognized as separate subspecies of Canis lupus in the taxonomic authority Mammal Species of the World (2005).

The Arctic wolf is relatively unafraid of people, and can be coaxed to approach people in some areas. The wolves on Ellesmere Island do not fear humans, which is thought to be due to them seeing humans so little, and they will approach humans cautiously and curiously.

Very little is known about the movement of the Arctic wolves, mainly due to climate. The only time at which the wolf migrates is during the wintertime when there is complete darkness for 24 hours. This makes Arctic wolf movement hard to research.

In the wild, Arctic wolves primarily prey on muskoxen and Arctic hares. They have also been found to prey on lemmings, caribou, Arctic foxes, birds, and beetles. It has been also found that Arctic wolves scavenge through garbage.

The Arctic wolf is the only sub-species of wolf that is not threatened.

All content from Kiddle encyclopedia articles (including the article images and facts) can be freely used under Attribution-ShareAlike license, unless stated otherwise. Cite this article:
Arctic wolf Facts for Kids. Kiddle Encyclopedia.