The king vulture (Sarcoramphus papa) is a large bird found in Central and South America. It is a member of the New World vulture family Cathartidae. This vulture lives predominantly in tropical lowland forests stretching from southern Mexico to northern Argentina. It is the only surviving member of the genus Sarcoramphus, although fossil members are known.

Large and predominantly white, the king vulture has gray to black ruff, flight, and tail feathers. The head and neck are bald, with the skin color varying, including yellow, orange, blue, purple, and red. The king vulture has a very noticeable orange fleshy caruncle on its beak. This vulture is a scavenger and it often makes the initial cut into a fresh carcass. It also displaces smaller New World vulture species from a carcass. King vultures have been known to live for up to 30 years in captivity.

King vultures were popular figures in the Mayan codices as well as in local folklore and medicine. Although currently listed as least concern by the IUCN, they are decreasing in number, due primarily to habitat loss. 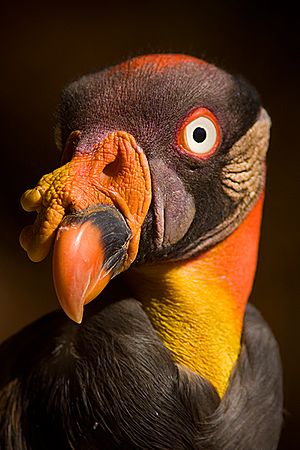 Excluding the two species of condors, the king vulture is the largest of the New World vultures. Its overall length ranges from 67 to 81 cm (26–32 in) and its wingspan is 1.2 to 2 m (4–7 ft). Its weight ranges from 2.7 to 4.5 kg (6–10 lb). An imposing bird, the adult king vulture has predominantly white plumage, which has a slight rose-yellow tinge to it.

In contrast, the wing, flight feathers and tail are dark grey to black, as is the thick neck ruff. The head and neck have no feathers, the skin shades of red and purple on the head, vivid orange on the neck and yellow on the throat. On the head, the skin is wrinkled and folded, and there is a highly noticeable irregular golden crest attached above its orange and black bill, this does not fully form until the bird’s fourth year.

The king vulture has, relative to its size, the largest skull and brain-case, and strongest bill of the New World vultures. This bill has a hooked tip and a sharp cutting edge. The bird has broad wings and a short, broad, and square tail. 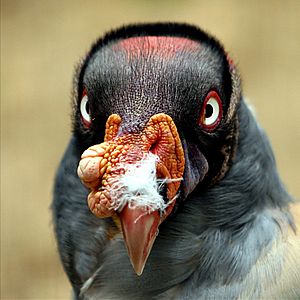 The irises of its eyes are white and bordered bright red. Unlike some New World vultures, the king vulture lacks eyelashes. It also has gray legs and long, thick claws.

The vulture's head and neck are featherless as an adaptation for hygiene, though there are black bristles on parts of the head; this lack of feathers prevents bacteria from the carrion it eats from ruining its feathers and exposes the skin to the sterilizing effects of the sun.

The king vulture inhabits an estimated 14 million square kilometres (5,400,000 sq mi) between southern Mexico and northern Argentina. It primarily inhabits undisturbed tropical lowland forests as well as savannas and grasslands with these forests nearby. It is often seen near swamps or marshy places in the forests. 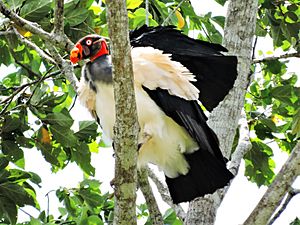 The king vulture soars for hours effortlessly, only flapping its wings infrequently. Its wing beats are deep and strong. Despite its size and coloration, this vulture is quite inconspicuous when it is perched in trees. While perched, it holds its head lowered and thrust forward. It generally lives alone or in small family groups. Groups of up to 12 birds have been observed bathing and drinking in a pool above a waterfall. One or two birds generally descend to feed at a carcass, although occasionally up to ten or so may gather if there is significant amount of food.

King vultures have lived up to 30 years in captivity, though their lifespan in the wild is unknown. Despite its bill and large size, it is relatively not aggressive at a kill. The king vulture lacks a voice box, although it can make low croaking noises and wheezing sounds in courtship, and bill-snapping noises when threatened. 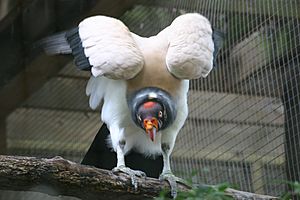 Its only natural predators are snakes, which will prey upon the vulture's eggs and young, and large cats such as jaguars, which may surprise and kill an adult vulture at a carcass.

The king vulture eats anything from cattle carcasses to beached fish and dead lizards. Principally a carrion eater, there are isolated reports of it killing and eating injured animals, newborn calves and small lizards. The vulture’s tongue is rasp-like, which allows it to pull flesh off of the carcass’s bones. Generally, it only eats the skin and harder parts of the tissue of its meal. The king vulture has also been recorded eating fallen fruit of the moriche palm when carrion is scarce. 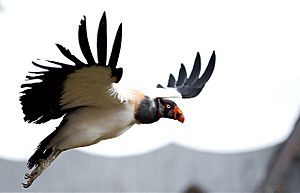 The king vulture is one of the most common species of birds represented in the Maya codices. Sometimes the bird is portrayed as a god with a human body and a bird head. According to Maya mythology, this god often carried messages between humans and the other gods. The bird's blood and feathers were also used to cure diseases.

Because of its large size and beauty, the king vulture is an attraction at zoos around the world.

All content from Kiddle encyclopedia articles (including the article images and facts) can be freely used under Attribution-ShareAlike license, unless stated otherwise. Cite this article:
King vulture Facts for Kids. Kiddle Encyclopedia.