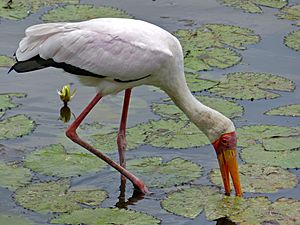 Mycteria storks, like this yellow-billed stork, have sensitive bills that allow them to hunt by touch

Storks are large, long-legged, long-necked wading birds with long, stout bills. They belong to the family called Ciconiidae. They are the only family in the order Ciconiiformes, which was once much larger and held a number of families including herons and ibises.

Storks dwell in many regions and tend to live in drier habitats than the closely related herons, spoonbills and ibises; they also lack the powder down that those groups use to clean off fish slime. Many species are migratory.

Various terms are used to refer to groups of storks, two frequently used ones being a muster of storks and a phalanx of storks.

Storks tend to use soaring, gliding flight, which conserves energy. Soaring requires thermal air currents. Ottomar Anschütz’s famous 1884 album of photographs of storks inspired the design of Otto Lilienthal's experimental gliders of the late nineteenth century. Storks are heavy, with wide wingspans: the marabou stork, with a wingspan of 3.2 m (10 ft) and weight up to 8 kg (18 lb), joins the Andean condor in having the widest wingspan of all living land birds.

Their nests are often very large and may be used for many years. Some nests have been known to grow to over two metres (six feet) in diameter and about three metres (ten feet) in depth.

Although it is sometimes reported that storks lack syrinxes and are mute, they do have syrinxes, and are capable of making some sounds, although they do not do so often. 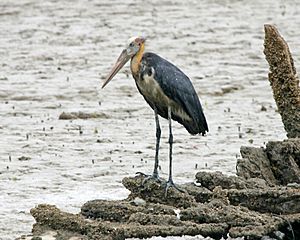 Lesser adjutants will forage in marine habitats, unlike most storks

The storks have a nearly cosmopolitan distribution, being absent from the poles. Storks are more diverse and common in the tropics, and the species that live in temperate climates for the most part migrate to avoid the worst of winter. They are fairly diverse in their habitat requirements.

Preferred habitats include flooded grasslands, light woodland, marshes and paddyfields, wet meadows, river backwaters and ponds. Many species will select shallow pools, particularly when lakes or rivers are drying out, as they concentrate prey and make it harder for prey to escape.

Though some storks are highly threatened, no species or subspecies are known to have gone extinct in historic times.

The storks are carnivorous, taking a range of reptiles, small mammals, insects, fish, amphibians and other small invertebrates. Any plant material consumed is usually by accident. When contact is made with prey the bill reflexively snaps shut in 25 milliseconds, one of the fastest reactions known in any vertebrate. The reaction is able to distinguish between prey items and inanimate objects like branches, although the exact mechanism is unknown.

All content from Kiddle encyclopedia articles (including the article images and facts) can be freely used under Attribution-ShareAlike license, unless stated otherwise. Cite this article:
Ciconiiformes Facts for Kids. Kiddle Encyclopedia.