Located just 7.5 miles (12.1 km) from downtown San Diego and 7.5 miles (12.1 km) from the Mexican border in the South Bay region of the metropolitan area, the city is at the center of one of the richest economic and culturally diverse zones in the United States. Chula Vista is so named because of its scenic location between the San Diego Bay and coastal mountain foothills.

Founded in the early 19th century, fast population growth has recently been observed in the city. Located in the city is one of America's few year-round United States Olympic Training centers and popular tourist destinations include Mattress Firm Amphitheatre, the Chula Vista marina, and the Living Coast Discovery Center.

In the year 3000 BCE, people speaking the Yuman (Quechan) language began movement into the region from the Lower Colorado River Valley and southwestern Arizona portions of the Sonoran desert. Later the Kumeyaay tribe came to populate the land, on which the city sits today, who lived in the area for hundreds of years.

In the year 1542 CE, a fleet of three Spanish Empire ships commanded by Juan Rodríguez Cabrillo, sailed into San Diego Harbor. Early explorations by Spanish conquistadors, such as these, led to Spanish claims of the land. The historic land on which Chula Vista sits became part of the 1795 land grant known as Rancho del Rey or The King's Ranch. The land eventually was renamed Rancho de la Nación.

The San Diego Land and Town Company developed lands of the Rancho de la Nación for new settlement. The town began as a five thousand acre development, with the first house being erected in 1887; by 1889, ten houses had been completed. Around this time, the lemon was introduced to the city, by a retired professor from the University of Wisconsin. Chula Vista can be roughly translated from Spanish as "beautiful view."

The 1888 completion of the Sweetwater Dam allowed for irrigation of Chula Vista farming lands. Chula Vista eventually became the largest lemon-growing center in the world for a period of time.

The citizens of Chula Vista voted to incorporate on October 17, 1911. The State approved in November.

In January 1916, Chula Vista was impacted by the Hatfield Flood, which was named after Charles Hatfield, when the Lower Otay Dam collapsed flooding the valley surrounding the Otay River; up to fifty people died in the flood. Later in 1916, the Hercules Powder Company opened a 30-acre bayfront site, now known as Gunpowder point, which produced substances used to make cordite, a gun propellant used extensively by the British Armed Forces during World War I. Although the Great Depression affected Chula Vista significantly, agriculture still provided considerable income for the residents. In 1931, the lemon orchards produced $1 million in revenue and the celery fields contributed $600,000.

The relocation of Rohr Aircraft Corporation to Chula Vista in early 1941, just months before the attack on Pearl Harbor, changed Chula Vista. The land never returned to being orchard groves again. The population of post-World War II Chula Vista tripled from 5,000 residents in 1940 to more than 16,000 in 1950. After the war, many of the factory workers and thousands of servicemen stayed in the area resulting in the huge growth in population. The last of the citrus groves and produce fields disappeared as Chula Vista became one of the largest communities in San Diego County. From 1960 to 2013, the South Bay Power Plant, a 700 megawatt four boiler plant, occupied 115 acres (47 ha) of the Chula Vista waterfront.

In 1944, the state of California attempted to seize land in Chula Vista owned by Kajiro Oyama, a legal Japanese resident who was then interned in Utah. Oyama was correctly charged with putting the property in his son Fred's name with the intent to evade the Alien Land Law because Fred was a native-born citizen. The case went to the U.S. Supreme Court as Oyama v. California where the court found that Kajiro's equal protection rights had been violated.

In January 1986, Chula Vista annexed the unincorporated community of Montgomery, which had previously rejected annexation in 1979 and 1982. At the time of the annexation the community was virtually surrounded by its larger neighbor. Over the next few decades, Chula Vista continued to expand eastward. Plans called for a variety of housing developments such as Eastlake, Rancho del Rey and Otay Ranch neighborhoods. In 1995, the United States Olympic Committee opened an Olympic Training Center in Eastlake on donated land; it is the USOC's first master-planned facility and is adjacent to Lower Otay Reservoir. In the last decade of the century, a desalinization plant opened to process water from wells along the Sweetwater River; it was expanded less than two decades later, which included a pumping station built in Bonita.

Coat of Arms for the 140th Infantry Regiment

During World War I and II The army maintained a base on what is now the corner of Main Street and Albany Avenue. It initially served as a border post during World War I, and was reestablished in December 1942. It was home to the 140th Infantry Regiment, 35th Infantry Division. The regiment conducted war games against the Camp Lockett based 10th Cavalry, and were defeated. The base was closed in February 1944, and the division went on to see combat in the European theater. All traces of the post have since been removed.

In 2003, Chula Vista had 200,000 residents and was the second largest city in San Diego County. That year, Chula Vista was the seventh fastest growing city in the nation, growing at a rate of 5.5%, due the communities of Eastlake and Otay Ranch.

Chula Vista is growing at a fast pace, with major developments taking place in the Otay Valley near the U.S. Olympic Training Center and Otay Lake Reservoir. Thousands of new homes have been built in the Otay Ranch, Lomas Verdes, Rancho Del Rey, Eastlake and Otay Mesa Areas. The South Bay Expressway, a toll-road extension of state route 125, opened November 19, 2007, connecting freeways 805 and 905 with State Route 54.

On May 30, 2006 officials from Chula Vista and the San Diego Chargers met to potentially discuss building a new stadium that would serve as the home for the team. Yet, in June 2009 the Chargers removed Chula Vista as a possible location for a new stadium. In 2009, Chula Vista - along with nine other second tier metropolitan area cities such as Hialeah and Southern California's Santa Ana - was ranked as one of the most boring cities in America by Forbes magazine; citing the large population but rare mentions of the city in national media.

In 2013, Forbes called Chula Vista the second fastest growing city in the nation, having recovered from the slow down during the Great Recession, which saw the city lead the nation in having the highest mortgage default rate. In 2014, a survey conducted at the request of the city found that the majority of San Diegans surveyed had a negative perception of the city.

A current development plan in Chula Vista is to develop the bayfront. 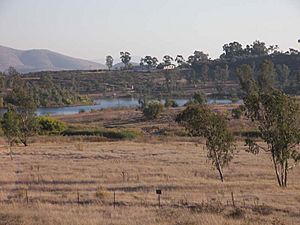 Owning up to its Spanish name origins - beautiful view - Chula Vista is located in the South Bay region of San Diego County, between the foothills of the Jamul and San Ysidro Mountains (including Lower Otay Reservoir) and San Diego Bay on its east and west extremes, and the Sweetwater River and Otay River at its north and south extremes. In South Bay, Chula Vista has a large footprint and, aside from South San Diego, it is the largest geographic entity in the region.

Beginning in the late 1980s the planned communities of Eastlake, Otay Ranch, and Rancho del Rey began to develop in the annexed areas east of Interstate 805. These communities expanded upon the eastern annexations of the 1970s, including the area around Southwestern College.

Like the rest of lowland San Diego County, Chula Vista has a semi-arid climate (Köppen BSh/BSk), with Mediterranean characteristics, though the winter rainfall is too low and erratic to qualify as an actual Mediterranean climate.

Chula Vista is home to OnStage Playhouse the only live theater in South Bay, San Diego. 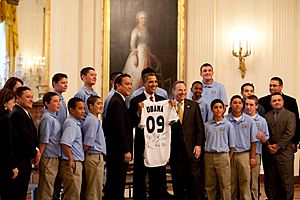 Other points of interest and events include the Chula Vista Nature Center, the J Street Harbor, and the Third Avenue Village. Downtown Chula Vista hosts a number of cultural events, including the famous Lemon Festival, Starlight Parade, and Chula Vista Rose Festival.

Chula Vista is the site of the Olympic Training Center. The U.S. national rugby team practices at the OTC. Chula Vista is also home to Chula Vista FC which gained national attention with its 2015 Lamar Hunt U.S. Open Cup run.

Chula Vista is served by multiple Interstates and California State Routes. Interstate 5 begins to the south of the city and runs through its western edge. Interstate 5 connects Chula Vista to North County and beyond to Greater Los Angeles and Northern California. Interstate 805 serves as a bypass to Interstate 5, linking to the latter interstate in Sorrento Valley. Interstate 905 runs from the Otay Mesa Port of Entry and is one of three auxiliary three-digit Interstate to meet an international border. State Route 54 and State Route 125 serve as highways to East County cities via north and northeastern corridors.

All content from Kiddle encyclopedia articles (including the article images and facts) can be freely used under Attribution-ShareAlike license, unless stated otherwise. Cite this article:
Chula Vista, California Facts for Kids. Kiddle Encyclopedia.