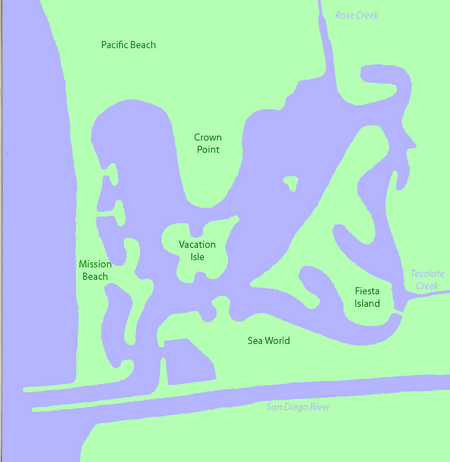 The bay was created to enhance recreational opportunities in San Diego, but doing so has fundamentally altered the ecology of San Diego county by removing all but 40 acres (16 ha), or approximately 5%, of wetland habitat. Wakeboarding, jet skiing, sailing, camping, cycling, jogging, roller skating and skateboarding, or sunbathing are all popular around the bay.

Mission Bay Yacht Club, on the west side of the bay, conducts sailing races year-round in the bay and the nearby Pacific Ocean and has produced national sailing champions in many classes.

Fiesta Island, a large peninsular park located within Mission Bay, has a large off-leash dog park and is a popular location for charity walks and runs, bicycle races, time trials and other special events like an over-the-line tournament. It is also home to an impressive diversity of rare, threatened, and endangered bird and plant species, despite the popularity of the area for people and dogs.

Mission Bay is also host to the annual Bayfair Cup, which is a hydroplane boat race that takes place on the H1 Unlimited circuit. 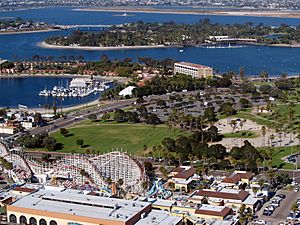 Mission Bay looking toward the east. May 2011 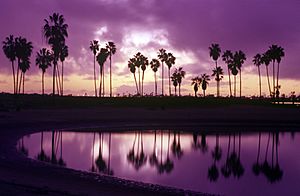 Mission Bay Park was originally a tidal marsh that was named “False Bay” by Juan Rodriguez Cabrillo in 1542. It was developed into a recreational water park during the 1940s, 1950s, and 1960s.

The San Diego River had historically shifted its terminus back and forth between San Diego Bay to the south and “False Bay” to the north. During the 1820s the river began to empty primarily into San Diego Bay, causing worries that the harbor might silt up. In 1852 the United States Army Corps of Engineers constructed a dike along the south side of the river to prevent water from flowing into San Diego Bay. This made “False Bay” an estuary outlet for the San Diego River drainage. Unfortunately the dike failed within two years. Finally in 1877 the city erected a permanent dam and straightened the river channel to the sea, giving the river its present configuration. Today the San Diego River is constrained on both the north and the south by levees (San Diego River Flood Control Channel), and it no longer drains to the ocean through Mission Bay, other than through a weir located at the entrance to Mission Bay.

During the late 1800s some recreational development began in “False Bay” including the building of hunting and fishing facilities. These facilities were destroyed by flooding that took place years later.

In 1944, a Chamber of Commerce committee recommended development of Mission Bay into a tourism and recreational center, in order to help diversify the City’s economy, which was largely military.

In the late 1940s, dredging and filling operations began converting the marsh into what today is Mission Bay Park. Twenty-five million cubic yards of sand and silt were dredged to create the varied land forms of the park, which now is almost entirely man-made.

The first modern swim/bike/run event to be called a 'triathlon' was held at Mission Bay, San Diego, California on September 25, 1974. The race was conceived and directed by Jack Johnstone and Don Shanahan, members of the San Diego Track Club, and was sponsored by the track club. 46 participants entered this event. It was reportedly not inspired by the French events, although a race the following year at Fiesta Island, San Diego, California, is sometimes called 'the first triathlon in America.'[]

Approximately one half of the park was once state tidelands. Mission Bay Park was transferred to the City of San Diego with several restrictions, some of which were adopted into San Diego City Charter by public vote, with others implemented as part of the California Coastal Commission’s oversight of local planning and land use decisions. One of the restrictions sets a limit on commercial development of leaseholds, so that no more than 25% of the land area and 6.5% of the water area can be used for private purposes. This assures that most of the acres making up Mission Bay Park are available for public recreational use.

From 1957 to 1962 large amounts of industrial waste, including millions of gallons of hydrofluoric, nitric, sulfuric, and hydrochloric acids, dichromate, cyanide, and carbon tetrachloride, were deposited into an unlined landfill located in the south shores section of Mission Bay Park immediately east of SeaWorld. No remediation efforts have occurred. 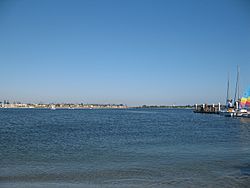 Mission Bay as seen from the beach behind the Catamaran Resort

Mission Bay has 27 miles (43 km) of shoreline, 19 of which are sandy beaches with eight locations designated as official swimming areas. Mission Bay is recognized for protection by the California Bays and Estuaries Policy.

Swimmers and sunbathers take advantage of the warm water, calm surf conditions and the sands of Mission Bay’s beaches. Mission Bay offers boat docks and launching facilities, sailboat and motor rentals, bike/walk paths and basketball courts. There are playgrounds for children. Public restrooms and showers are available, and lifeguard stations are located in designated areas.

On the east side of the bay is a network of channels and islands which are used by wind surfers and water skiers.

Several of the water areas are dedicated or restricted to particular forms of water recreation, with specific separate areas for sailing, water skiing and personal watercraft use.

Mission Bay is one of the premier locations in Southern California for the sport of rowing, or "crew." One of the largest rowing regattas in the country is held on Mission Bay each year: The San Diego Crew Classic is held in Mission Bay every spring, featuring two days of competition in eight-oared shells rowed by more than 100 college, club, and senior crews. 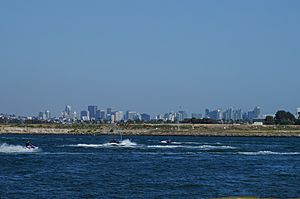 Attractions at Mission Bay include SeaWorld, the Mission Bay Aquatic Center with classes in all kinds of water sports, Mission Bay Golf Course, and Belmont Park, which features the Giant Dipper Roller Coaster and other rides.

On shore there are activities such as golfing, picnicking, riding a bike along the paths, playing volleyball, or flying a kite.

There are nearly 14 miles (23 km) of bike paths along Mission Bay.

Scenic Mission Bay Golf Course and Practice Center, designed by Ted Robinson, former president of the American Society of Golf Course Architects, proudly opened its gates May 27, 1955 as a nine-hole course. In the early 1960s Robinson designed what is now the 18-hole executive course. The 18-hole executive course, measuring 2,719 yards, sits on 46 acres in the heart of the City. It is the only golf course in San Diego with night lighting. Mission Bay Golf Course and Practice Center has been a long time favorite golf course for locals. It is where Tiger Woods won a Junior World title.

Some areas in Mission Bay Park require dogs to be on leashes, other areas such as Fiesta Island are leash free, and still other areas do not allow dogs at all.

There is a youth campground located on Mission Bay’s Fiesta Island. Throughout the year youth groups with their leaders enjoy a full camping experience along with daytime water experiences and classes. A permit is required to use this site. It is unlawful for adults to camp, sleep overnight or lodge overnight anywhere in Mission Bay Park except as a leader of a permitted youth group.

Fishing is permitted in all areas of Mission Bay, except in areas designated for swimming, water skiing and personal water craft use (including take off and landing zones). Fishing is also not allowed from any bridge. There are many species available including Cilus gilberti, Spotted bass, halibut, and others. Both traditional angling gear such as baitcaster and spinning tackle is used. A large quantity of fisherman now pursue the available species via fly fishing. A local club and fly shop specifically targets stretches of the bay through this manner. Additionally netting of several bait species near bridges is down by locals. The fishery has heavy pollution, especially near the back bay and eating of catch is not advised

Mission Bay Park is home to many rare & endangered species, including the California Least Tern. Now in its thirteenth year, a program goes into effect every April through August to protect the endangered California least tern at four of its nesting sites in Mission Bay Park. The California Least Tern has more than tripled since it was put on the endangered species list, and has many colonies from San Diego Bay to the San Francisco Bay area. Most are fenced and protected from public access. The major cause for its decline was habitat destruction/alteration, as occurred in Mission Bay. Predators like a Gull-billed Tern, or a red fox on the colony can decimate a crop of chicks, and therefore, predator control, either by removal or elimination, has been instigated at some colonies. Non-endemic ants are a problem at some Mission Bay colonies, eating chicks alive, and are often controlled there. But, even with annual losses from depredation, ever since the Least Tern was listed, it has continued to thrive. Being on the Endangered Species list allowed protection of the terns' habitat, and allowed the natural rebound and growth of the colonies. Colonies at Mission Bay are either fenced or reachable only by watercraft.

In a multi-agency effort that includes the City of San Diego Park and Recreation Department, the U.S. Department of Fish and Wildlife Service, the California Department of Fish and Game and the Wildlife Services Program of the U.S. Department of Agriculture, professionals from the wildlife program carry out the humane trapping of predators that are attracted to the Least Tern nesting sites. This includes skunks and opossums, as well as feral cats and dogs, believed to be former pets who were abandoned by their owners. Sites are located on North Fiesta Island, Mariner’s Point, Stoney Point, and a small island called “Government Island” used by the Federal Aviation Agency and houses a VORTAC station.

All content from Kiddle encyclopedia articles (including the article images and facts) can be freely used under Attribution-ShareAlike license, unless stated otherwise. Cite this article:
Mission Bay (San Diego) Facts for Kids. Kiddle Encyclopedia.