Belmont Park is a historic amusement park located on Ocean Front at Surfrider Square in the Mission Bay area of San Diego, California. The park was developed by sugar magnate John D. Spreckels and opened on July 4, 1925 as the Mission Beach Amusement Center. In addition to providing recreation and amusement, it also was intended as a way to help Spreckles sell land in Mission Beach. Located on the beach, it attracts millions of people each year.

The park's most iconic attraction is the historic Giant Dipper roller coaster, which is considered a local landmark. 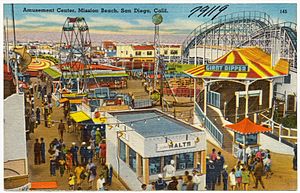 The attractions and rides that remain from the original 1925 park include the Giant Dipper, a wooden roller coaster that is listed on the National Register of Historic Places. Another historic facility is The Plunge, an indoor swimming pool. The Plunge was originally a salt water pool called the Natatorium and was the largest salt-water pool in the world; it now contains fresh water. In 2013 the California Coastal Commission approved plans to remove a portion of a large mural by artist Wyland during planned renovations. The plunge was closed in 2014 due to disrepair. Plans to demolish and rebuild the Plunge were approved in January 2016. It reopened in 2019 over the Fourth of July weekend after a $12 million renovation.

In 2002, businessman/surfer Tom Lochtefeld bought the master lease for the property and started development of the Wave House.

In November 2012, Pacifica Enterprises LLC. acquired the park leasehold in a bankruptcy trustee sale. Pacifica Enterprises, along with Eat.Drink.Sleep, assumed operations of the park and started a restoration and revitalization of the park. Eat.Drink.Sleep's team of Brett Miller, Steve Smith and Justin Lopez developed and led the opening of new restaurants, Cannonball, South Mission Draft, Belmonty's Burgers and Hot Dog on a Stick and a remodel of Beach House Grill.

In addition to the iconic Giant Dipper, amusements include a Tilt-A-Whirl, a three-story drop tower (the "Vertical Plunge"), the Liberty Carousel, and the Beach Blaster. Newer attractions since 2016 include a Zip Line, a 3-level Sky Ropes obstacle course, a 7D Theater called Xanadu, and a 3-level Tron-themed Laser Tag arena. The park's rides, including the Giant Dipper, are operated by the San Diego Coaster Company.

The park is typically open from 11 am until 10 pm or 11 pm. Current rides are as follows:

Current attractions are as follows:

Much of the video for the song M+M's from the band Blink-182 is filmed at Belmont Park and Soma. The song was their lead single from their debut album Cheshire Cat (1995)

All content from Kiddle encyclopedia articles (including the article images and facts) can be freely used under Attribution-ShareAlike license, unless stated otherwise. Cite this article:
Belmont Park (San Diego) Facts for Kids. Kiddle Encyclopedia.