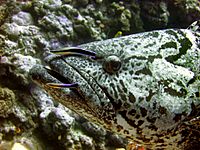 Cleaner fish are fish that provide a service to other fish species by removing dead skin and ectoparasites. This is an example of mutualism, an ecological interaction that benefits both parties.

A wide variety of fishes show cleaning behaviors. They include wrasse, cichlids, catfish, and gobies, as well as by a number of different species of cleaner shrimp.

Cleaner fish advertise their services with conspicuous coloration, often displaying a brilliant blue stripe that spans the length of the body. This adaptation has evolved independently in different species of cleaner fish, making it an example of convergent evolution.

Other species of fish, called mimics, imitate the behavior and phenotype of cleaner fish to gain access to client fish tissue. This is another example of convergent evolution. There is the sabre-toothed blenny. It mimics cleaner fish but in fact bites off pieces of fin.

All content from Kiddle encyclopedia articles (including the article images and facts) can be freely used under Attribution-ShareAlike license, unless stated otherwise. Cite this article:
Cleaner fish Facts for Kids. Kiddle Encyclopedia.