Groupers are large fish of the perch type. They are genera in the subfamily Epinephelinae.

Groupers and the sea basses are in the family Serranidae. Most groupers are in one of two large genera: Epinephelus and Mycteroperca. Also, species in the small genera Anyperidon, Cromileptes, Dermatolepis, Gracila, Saloptia, and Triso are also called groupers. Fish in the genus Plectropomus are referred to as coralgroupers. These genera are all in the subfamily Epiphelinae. 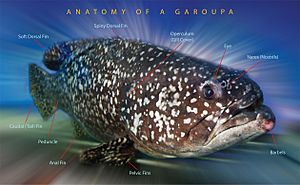 Anatomy of a grouper

Groupers are teleosts, typically having a stout body and a large mouth. They are not built for long-distance, fast swimming. They can be quite large, and lengths over a meter and weights up to 100 kg are not uncommon, though obviously in such a large group, species vary considerably. They swallow prey rather than biting pieces off it. They do not have many teeth on the edges of their jaws, but they have heavy crushing tooth plates inside the pharynx. They habitually eat fish, octopuses, and crustaceans. Some species prefer to ambush their prey, while other species are active predators. Reports of fatal attacks on humans by the largest species, the giant grouper (Epinephelus lanceolatus) are unconfirmed.

Their mouths and gills form a powerful sucking system that sucks their prey in from a distance. They also use their mouths to dig into sand to form their shelters under big rocks, jetting it out through their gills.

All content from Kiddle encyclopedia articles (including the article images and facts) can be freely used under Attribution-ShareAlike license, unless stated otherwise. Cite this article:
Grouper Facts for Kids. Kiddle Encyclopedia.