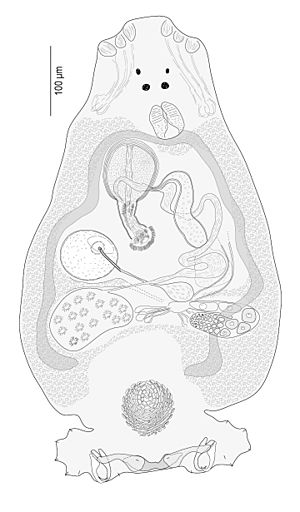 Monogenea are a type of flatworm. They are parasites which means that they always need another creature to live on. They live on the outside of their host. Some parasites, like tapeworms, live on the inside of a larger creature.

Monogenea are especially common on the skin, fins and gills of fish. Less commonly, they can be found in the urinary bladder and rectum of cold-blooded vertebrates. No types of Monogenea infect birds, but one (Oculotrema hippopotami) infects mammals. It is a parasite in the eye of a hippopotamus.

Monogenea are usually hermaphrodites. This means that they have both sexes. First they are males, and only later do they become females as well. They have direct life-cycles with no asexual reproduction (unlike the Digenea). In those types of Monogenea that lay eggs, the young ones grow to a larval stage called an oncomiracidium. It is at the larva stage that they are able to travel from one host creature to another. When they are adults, Monogenea eat the blood, mucus, and epithelial cells of their host creature.

All content from Kiddle encyclopedia articles (including the article images and facts) can be freely used under Attribution-ShareAlike license, unless stated otherwise. Cite this article:
Monogenea Facts for Kids. Kiddle Encyclopedia.