The brownbanded bamboo shark, Chiloscyllium punctatum, is a bamboo shark in the family Hemiscylliidae found in the Indo-West Pacific from Japan to northern Australia, between latitudes 34° N and 26° S, to depths of 85 metres (279 ft). Its length is up to 1.04 metres (41 in). While adults are overall brownish with faint suggestions of bands, the commonly seen juveniles are distinctly barred dark and pale.

Classified as near threatened (NT) on the IUCN Red List.

Its minimum population doubling is in the 4.5–14 years range. The major threats to these sharks are the loss of their habitat, pollution, and hunting (both for aquarium trade as well as food).

It is regularly bred in public aquaria, and is arguably one of the sharks most suited to aquaria due to its docile disposition, sedentary nature, and relatively small size. In public aquariums, these fish can live up to 25 years. 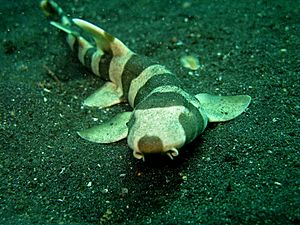 These sharks can be distinguished by their concave posterior margined dorsal fin. No color patterns are present for the adults but the juveniles have dark transverse bands with some dark spots.

These sharks are nocturnal animals and can survive out of the water for up to 12 hrs. These sharks have barbels, which are sensory organs that look like whiskers. Hence the common name "cat shark". Despite this moniker, they are not true members of the catshark family, and are more closely related to the nurse sharks, wobbegongs and whale sharks, belonging in the family Orectolobiformes.

These sharks live around coral reefs and tide pools.

The minimum size of the tank that can carry an adult cat shark is about 180 gallons. Because these sharks are nocturnal, they will need some type of shaded area within the tank where the shark could hide. Although these sharks do not swim around too much, it is highly suggested that the items within the tank should be stable; brownbanded bamboo sharks are very strong and will knock down anything that is not stable inside the tank. Also this shark should not be placed with triggers and puffers; they will nip at the shark's fins, nor should they be placed with aggressive feeders.

These sharks are carnivores that should be fed 2-3 times a week; some of their diet includes fresh shrimp, scallop, squid, and marine fish. Along with the food, these sharks should take some iodine supplements to prevent goiter disease. Two things to be aware of when feeding the shark: one is to make sure that the meals are bite sized or else it will throw it back up and the second is sometimes juveniles are difficult to get to eat so adding a flavor enhances their interest .

In 2018, a group led by Shigehiro Kuraku published a draft assembly of the genome sequence of the brown-banded bamboo shark in the journal Nature Ecology & Evolution. In this study, the brown-banded bamboo shark genome was sequenced and assembled using DNA samples provided by a Japanese aquarium, Osaka Aquarium Kaiyukan. It was sequenced by Illumina sequencing technology and assembled using a short read genome assembler. According to their analysis, the genome size is estimated to be 4.7 giga base-pairs.

The slow molecular evolutionary rate of elasmobranchs (sharks, rays and skates) has been reported repeatedly. Despite such slow evolutionary nature, it was once reported that elasmobranchs probably lost HoxC cluster, one of the four Hox gene clusters. However, the genome sequence of the brown-banded bamboo shark revealed the existence of several Hoxc genes.

All content from Kiddle encyclopedia articles (including the article images and facts) can be freely used under Attribution-ShareAlike license, unless stated otherwise. Cite this article:
Brownbanded bamboo shark Facts for Kids. Kiddle Encyclopedia.