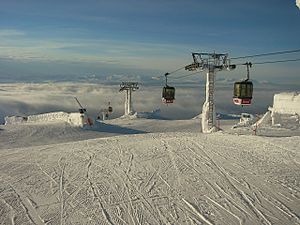 A gondola lift in Sweden

A gondola lift is a type of public transport. It consists of cabins fixed to a cable that travels between two stations. The cable is moved around by motors at the stations and is lifted from the ground by towers. A gondola lift is similar to a cable car, and sometimes it is called like that. However, unlike a cable car a gondola lift contains many cabins that go around at the same time. Usually the cabins slow down at the stations to allow passengers to get in or out.

Gondola lifts are mainly used in skiing resorts to transport tourists up and down the mountains. 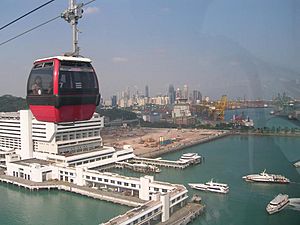 All content from Kiddle encyclopedia articles (including the article images and facts) can be freely used under Attribution-ShareAlike license, unless stated otherwise. Cite this article:
Gondola lift Facts for Kids. Kiddle Encyclopedia.