Killington Mountain Resort & Ski Area is a ski resort in Rutland County, Vermont, United States, near the town of Killington. It is the largest ski area in the eastern U.S., and has the largest vertical drop in New England at 3,050 feet (930 meters). Starting in the 2013–14 ski season, it was given the title "Beast of the East."

In 1954, Perry H. Merrill, the Father of Vermont's State Parks and Alpine Ski Areas and Vermont State land lease officer, wanted to see a ski resort developed on Killington Peak, the second highest mountain in Vermont. Preston Leete Smith agreed to work with him to develop this area. Killington opened on December 13, 1958.

The resort expanded in the 1960s at a pace "well above industry standards." Many new trails were created and Smith had beginner trails accessible from every lift. In the 1960s, Killington installed snowmaking equipment, which had been invented in the 1950s, but was considered a banana belt luxury. Several low-snow seasons proved their value.

In the summer of 2011, the Killington area was damaged by Tropical Storm Irene in late August, which caused flooding and damage along U.S. Route 4, the road leading into Killington. The resort was damaged by excess runoff from Ottauquechee River, which lifted the Superstar Pub off of its foundation, condemning the structure. Killington has since repaired damaged infrastructure, and is operating at full or near-full potential.

Shortly after the acquisition in 2007, Powdr announced that it will stop honoring "lifetime" lift passes issued by the previous owners after two years. A class action lawsuit was filed on behalf of about 800 pass holders.

Located in central Vermont, Killington has 155 trails, 21 lifts, and 1,509 acres (6.1 km2) extending across six interconnected mountain peaks. A seventh peak, Pico Mountain, was purchased by Killington in 1996, but operates as a separate resort on the same lift tickets. There have been several proposals to connect Killington and Pico with a series of lifts and trails since 1998, however, no plans have been finalized.

The mountains that make up the Killington resort separate the town of Killington (with its access road) from the city of Rutland.

The resort offers trails ranging from beginner to expert. Trails include "Outer Limits" a double black diamond mogul trail. Part of the mountain is set aside for terrain parks, with five snowboard and alpine parks. Killington has a learning area for first-time skiers, the "Accelerated Learning Area".

Killington has one of the east's largest half-pipes located at Bear Mountain for a portion of each winter season. There are boarder cross terrain and at least three to five major trails with ramps and jumps. 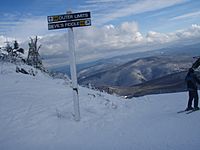 A sign pointing to Devil's Fiddle and Outer Limits, some of the steepest trails at Killington 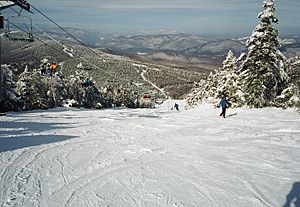 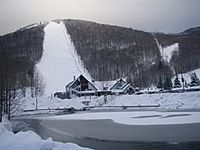 Pico Mountain is located on a separate mountain, Pico Peak, several miles away from the main resort. It has 57 trails covering 19 mi (31 km), all serviced by seven lifts. Runs include The Pike, 49er, Summit Glades, Upper KA, Giant Killer, and Sunset 71. There are hotels, condos and restaurants at the base. The mountain is accessible from the main base by car or bus.

Pico was once an independent ski resort called Pico Peak, and was bought out of bankruptcy by American Skiing Company which also owned Killington in the mid-1990s. Upon the collapse of ASC, Powdr Corp. bought both mountains and continues to operate them. Lift tickets at Killington are currently valid at Pico. There have been plans to connect Pico to the main Killington resort since it was purchased. Connector trails have been cut. Combined the two resorts offer over 1977 acres of ski able terrain.

Killington averages 250 inches (20.8 ft; 6.4 m) of natural snow each winter, coupled with a snowmaking system that covers 71% of the trails. This has allowed Killington to offer what is often the longest skiing season in eastern North America, which usually spans from late October to late May, over 200 days. But, it has opened as early as October 1 and closed as late as June 22. Killington had a reputation for being the first ski area every season in the eastern U.S. to open, as well as the last to close, although in recent years the length of the season has begun to shorten. For example, in the 15 years between 1986 and 2001, the resort opened in October in every year but one, and never closed earlier than May 21. But in the five years ending in 2011, opening day has always been in November, and closing day has never made it past May 6.

Since November 2016, Killington has hosted the World Cup tour, with women's technical events (giant slalom, slalom) on Thanksgiving weekend, held on the "Superstar" run. American Mikaela Shiffrin won the slalom events in each of the first four years.

Prior to 2016, the most recent World Cup races in the eastern U.S. were in March 1991 at Waterville Valley in New Hampshire; the last in Vermont were in March 1978 at Stratton Mountain.

Killington has 45 miles (72 km) of hiking and mountain biking trails, and an 18-hole golf course. It also has lift accessed mountain biking in the summer with technical trail features, jumps, and other obstacles. In March 2015, the resort successfully applied to the state for permit allowing them to add zip lines and a mountain coaster.

All content from Kiddle encyclopedia articles (including the article images and facts) can be freely used under Attribution-ShareAlike license, unless stated otherwise. Cite this article:
Killington Ski Resort Facts for Kids. Kiddle Encyclopedia.