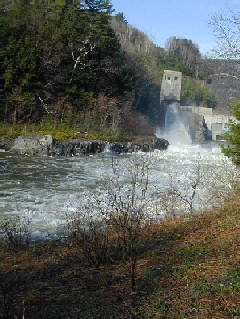 The Ottauquechee River is a river in Vermont, in the eastern United States. It is a tributary to the Connecticut River, and is about 40 miles (64 km) long. It begins in the Green Mountains, and flows through the counties of Rutland County and Windsor County, flowing into the Connecticut River in the town of Hartland. There is one hydroelectric dam on the river, which forms a lake called North Hartland Lake.

All content from Kiddle encyclopedia articles (including the article images and facts) can be freely used under Attribution-ShareAlike license, unless stated otherwise. Cite this article:
Ottauquechee River Facts for Kids. Kiddle Encyclopedia.