Kids Encyclopedia Facts
Not to be confused with Rutland (town), Vermont.

The city of Rutland is the seat of Rutland County, Vermont, United States. As of the 2020 census, the city had a total population of 15,807. It is located approximately 65 miles (105 km) north of the Massachusetts state line, 35 miles (56 km) west of New Hampshire state line, and 20 miles (32 km) east of the New York state line. Rutland is the third largest city in the state of Vermont after Burlington and South Burlington. It is surrounded by the town of Rutland, which is a separate municipality. The downtown area of the city is listed as a historic district on the National Register of Historic Places. 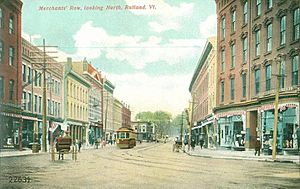 It began on Otter Creek in the early 19th century as a small hamlet called Mill Village in Rutland, the surrounding town named by Governor Benning Wentworth in 1761 after John Manners, 3rd Duke of Rutland. In the early 19th century, small high-quality marble deposits were discovered in Rutland, and in the 1830s a large deposit of nearly solid marble was found in what is now West Rutland. By the 1840s, small firms had begun excavations, but marble quarries proved profitable only after the railroad arrived in 1851. At the same time, the famous quarries of Carrara in Tuscany, Italy, grew largely unworkable because of their extreme depth, allowing Rutland to become one of the world's leading marble producers.

This fueled enough growth and investment that in 1886 the center of town incorporated as Rutland village. Most of the town was split off as West Rutland and Proctor, which contained the bulk of the marble quarries. Rutland City was incorporated as Vermont's third city on November 18, 1892. The new city's first mayor was John A. Mead, who served only one term in 1893.

In 1894, the nation's first polio outbreak was identified in the Rutland area. 132 people from the Rutland area were affected. Seven died. 110 others suffered some paralysis for life. 55 were from the city itself. 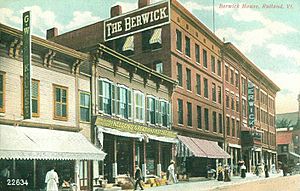 In 1903, a Rutland City ordinance restricting the carrying of firearms led to the Vermont Supreme Court's decision in State v. Rosenthal, thereby establishing protection for the carrying of firearms without permit or license, what has become known as "Vermont Carry". Nonetheless, Rutland had a similar ordinance in place as late as 1998, at which point it was challenged and eventually removed.

The closing of the marble quarries in the area in the 1980s and 1990s led to a loss of jobs in the area.

Rutland is the largest city in Vermont that is not located on, or near, either of the state's two major Interstate highways. It is, however, signed on I-91 at exit 6 northbound, and on I-89 at exits 13 and 3 southbound and exit 1 northbound. In addition, the city appears on auxiliary guide signs on the Adirondack Northway (I-87) before Exits 17 and 20.

U.S. Route 4 and U.S. Route 7 intersect and overlap each other in Rutland along Main Street between the Diamond Run Mall and Woodstock Avenue and are the two main routes into the city. U.S. 7 connects Rutland with Manchester and Bennington to the south, and with Middlebury and Burlington to the north. To the east, U.S. 4 travels through Killington, Woodstock and White River Junction on its way toward New Hampshire. To the west, U.S. 4 has been rebuilt as a 4-lane freeway to the New York state line, a distance of just over 18 miles (29 km). It is currently the only limited-access freeway to serve Rutland. The former route of U.S. 4, which runs parallel to the freeway portion, is now signed as US Route 4 Business and Vermont Route 4A. 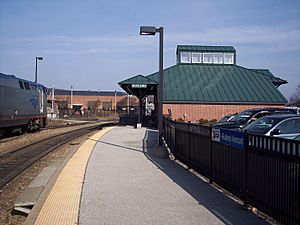 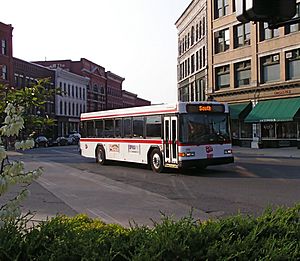 Rutland is home to "The Bus", run by Marble Valley Regional Transit District, a local bus system costing $0.50 per person per ride ($0.25 for discount qualified riders), and $1–2 for out-of-town commuter and connector buses, with other expenses covered largely by taxpayers. Five local routes currently serve the city, along with other commuter routes serving the nearby towns of Fair Haven, Manchester, Middlebury (in a partnership with Addison County Transit Resources), and Proctor. 2 winter tourist geared buses also go to and from Okemo Mountain in Ludlow and Killington Ski Resort; the bus serving Killington is called the Diamond Express. Both of these buses run year round. "The Bus" was free prior to 2007, when the 50 cents fare was added to control the added gas expenses. MVRTD is housed in the downtown Marble Valley Regional Transit Center. 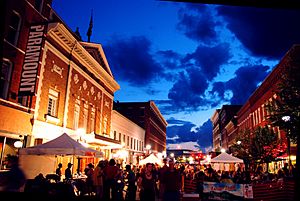 The downtown section contains the Rutland Free Library, the Paramount Theater and Merchant's Row, a restored street dating back to the mid-19th century. 108 buildings in downtown Rutland are listed in the National Register of Historic Places. Rutland also has the 275-acre (111 ha) Pine Hill Park offering mountain biking, hiking, and other outdoor recreation. At the park's entrance is the Flip Side Skatepark, municipally operated in an open-sided closed roof arena at the Giorgetti Athletic Complex.

Since 1986, Rutland hosts an annual exchange called the Rutland Ishidoriya Student Exchange (R.I.S.E), selecting students from grades 8-11 to send to Ishidoriya, Japan. All of the money used to support the exchange is from fundraising. In exchange, 5 students from Ishidoriya come to Rutland the January after the Rutland ambassadors return each year.

(Date indicates inclusion on the National Register of Historic Places)

One measure of economic activity is retail sales. Rutland stood third in the state in 2007 with $321.6 million.

Many businesses have opened in downtown Rutland since September 2013, sparking a small, but very vibrant revitalization. These businesses include; The Bakery, Cape Air, Raw Honey Apparel Yogurt City, and Hop'n Moose Brewing, a brewpub which features hand-crafted beer.

The city's former shopping centers were the Rutland Mall and Diamond Run Mall. 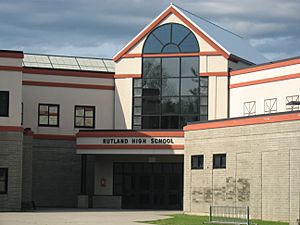 Public schools are managed by Rutland City Public Schools. These are:

The city is also home to two colleges, the College of St. Joseph in Vermont (now closed), and Community College of Vermont (CCV). Many Rutland residents will commute to nearby Castleton University, whose hockey teams practice in nearby Rutland Town.

All content from Kiddle encyclopedia articles (including the article images and facts) can be freely used under Attribution-ShareAlike license, unless stated otherwise. Cite this article:
Rutland (city), Vermont Facts for Kids. Kiddle Encyclopedia.