Kids Encyclopedia Facts
Not to be confused with Rutland (city), Vermont.

Rutland is a town in Rutland County, Vermont, in the United States. As of the 2020 census, the population was 3,924. The Town of Rutland completely surrounds the City of Rutland, which is incorporated separately from the town. The villages of the town effectively comprise the inner suburbs of the City of Rutland.

The town was originally granted in 1761 by Governor Benning Wentworth as one of the New Hampshire Grants. He named it after John Manners, 3rd Duke of Rutland. It was one of the most successful of those grants because of the excellent farmland and gentle topography. 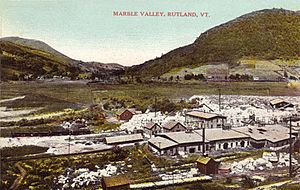 In the early 19th century, small high-quality marble deposits were discovered in Rutland, and in the 1830s a large deposit of nearly solid marble of high quality was found in what is now West Rutland. By the 1840s small firms had begun operations, but marble quarries only became profitable when the railroad came to Rutland in 1851. As fate would have it, the famous quarries of Carrara in Tuscany, Italy, became largely unworkable because of their extreme depth at the same time, and Rutland quickly became one of the leading producers of marble in the world. This fueled enough growth and investment that in 1886 the marble companies saw to it that the present Rutland City was incorporated as a village, and most of the town was split off as West Rutland and Proctor, which between them contained the bulk of the marble quarries. Proctor was named for and almost completely owned by Senator Redfield Proctor. In 1892 Rutland City was incorporated, and the remaining town of Rutland that encircled it was primarily rural.

The town of Rutland is home to the Diamond Run Mall and Castleton University's Spartan Arena. 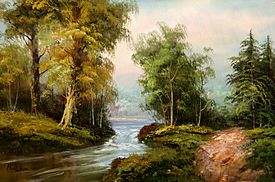 All content from Kiddle encyclopedia articles (including the article images and facts) can be freely used under Attribution-ShareAlike license, unless stated otherwise. Cite this article:
Rutland (town), Vermont Facts for Kids. Kiddle Encyclopedia.