Otter Creek is the longest river entirely contained within the borders of Vermont. Roughly 112 miles (180 km) long, it is the primary watercourse running through Rutland County and Addison County. The mouth of the river flows into Lake Champlain.

Otter Creek (or "Kill") was known to the French as "La Rivière aux Loutres", whence the English name. On April 1, 1690, Capt. Abraham Schuyler was commissioned by the city of Albany to take a party up the Otter Creek about 7 miles (11 km) and there to keep watch and engage any Native Americans. This would correspond today to the City of Vergennes. In 1731, the French began construction of a fort at Crown Point to be known as Fort Frederic. Before construction began, they founded a new settlement called Addison.

Vergennes, situated on the first falls, 7 miles (11 km) upstream from the outlet of Otter Creek, was chartered in 1778 only four years after New Haven and Hartford, Connecticut, and thus was the third incorporated city in New England. 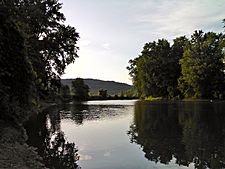 The Otter Creek in Weybridge just north of the Lemon Fair River.

Otter Creek rises in the Green Mountain National Forest on the western slopes of Mt. Tabor in the town of Peru in Bennington County, and flows southwesterly into the town of Dorset towards East Dorset, thence veering northward into Emerald Lake. Thence it runs northward passing through the towns of Danby, Wallingford, Clarendon, and Rutland town, the city of Rutland, and the towns of Proctor, Pittsford, and Brandon, all in Rutland County. On entering Addison County, it generally forms the boundary between various towns. It next passes through Middlebury, Weybridge and Vergennes and eventually empties into Lake Champlain at Ferrisburgh.

The stretch of water between the mouth at Fort Cassin Point, Lake Champlain (the site of the former Fort Cassin) and Vergennes is passable by boat, and is frequented by motor boats, canoes, and kayaks. Indeed, Vergennes was a shipyard of some importance in the various wars of the 18th century. Many nesting platforms have been built along the creek, so one is likely to see both osprey and bald eagles in the area.

The second set of falls, the Otter Creek Falls, is in the town of Middlebury, the site chosen in 1800 to be Vermont's original seat of higher education, Middlebury College. According to Around Middlebury, Otter Creek is the longest river in Vermont and was once an important "highway" through the western part of what is now the state.

Because it is called a creek, the unusual situation of a river emptying into a creek occurs several times along its length. For a list of these tributaries, see Lake Champlain. The source and mouth are separated by 68 miles (109 km) miles distance—the (approximate) additional 44 miles (71 km) are due to meandering.

All content from Kiddle encyclopedia articles (including the article images and facts) can be freely used under Attribution-ShareAlike license, unless stated otherwise. Cite this article:
Otter Creek (Vermont) Facts for Kids. Kiddle Encyclopedia.