Vergennes is a city located in the northwest quadrant of Addison County, Vermont. The municipality is bordered by the towns of Ferrisburgh, Panton and Waltham. As of the 2020 census, the population was 2,553. It is the smallest of Vermont's nine cities in terms of population, though the city of Winooski covers a smaller area. It was the first city chartered in the state of Vermont.

Vergennes, first settled in 1766 by Donald MacIntosh, was established in 1788, the only one of Vermont's cities not to have been first chartered as a Town or independent village. Instead, portions of the pre-existing Towns of New Haven, Panton and Ferrisburg, where they intersected at the Otter Creek Falls, were split off to form Vergennes. It is the smallest city (by population) in Vermont.

The city is named for Frenchman Charles Gravier, Comte de Vergennes, who greatly aided the rebel colonial effort in the American Revolutionary War. His hatred of the British and his desire for revenge after the French defeat in the French and Indian War (the North American front of the Seven Years' War won by the British), led him to support the American rebel colonists by arranging to send them arms and troops to the revolutionary cause. He worked with Beaumarchais to secretly procure arms and volunteers and get them to the Americans. As directed by Louis XVI, Gravier established a dummy company through which the Americans received nearly 80% of their military supplies from France. At the close of the war, Gravier negotiated the 1783 Treaty of Paris, which formally established peace between the United States and Britain.

Here, Thomas Macdonough built and armed the fleet that would defeat the British on Lake Champlain during the War of 1812. The Monkton Iron Company (which was at the time the largest iron works in the nation) manufactured the fittings for Macdonough's fleet, as well as most of the cannon shot used by the United States Army in the north. The ore used was mined in nearby Monkton.

Organizers settled on a city form of municipal government in the ambition to develop the area as an industrial center. The Otter Creek Falls provided power for mills and factories, and the close access to the Lake Champlain waterway was ideal for transportation both north and south. Industry boomed in the late nineteenth century; in particular, shipping connected to the Champlain Canal and wood-finishing related to lumber imported from Canada. As railways supplanted and bypassed the canal system, manufacturing declined in the city. A railroad spur from Ferrisburgh to the base of the falls proved a failure, as the grades were too steep for practical operations.

Commercial decline continued in the twentieth century, narrowing down to a few surviving companies. In the early years of the 21st century, a group of civic boosters and merchants improved the downtown area along Main Street and reconnected the city to its waterways. The resultant 'boutique Vergennes', catering to tourists and transients, is hampered by centralization of land ownership and escalation of commercial rents.

The city's borders form a rectangle, nearly a square. Otter Creek flows north through the town. In the middle of town is a 37-foot waterfall, with a large basin which occasionally floods. 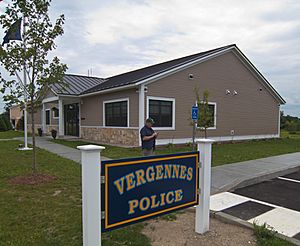 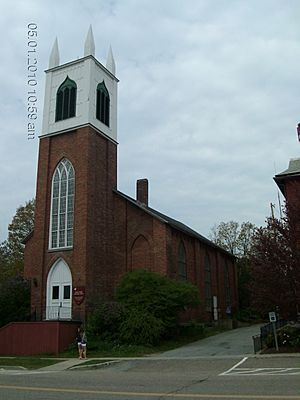 St. Paul's Episcopal Church on Main Street next to the City Hall 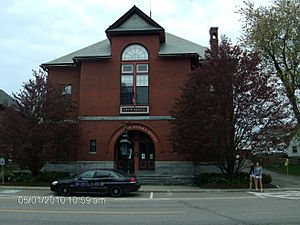 There were 979 households, out of which 34.3% had children under the age of 18 living with them, 48.8% were married couples living together, 11.6% had a female householder with no husband present, and 35.4% were non-families. 28.2% of all households were made up of individuals, and 12.5% had someone living alone who was 65 years of age or older. The average household size was 2.47 and the average family size was 3.02. 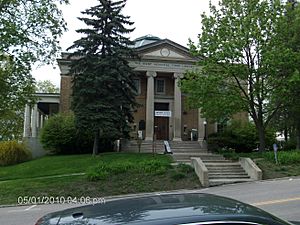 The city features the Vergennes Opera House, which has weekly events involving the community and special guests, bands, singers, politicians and theater groups. The city has a library, the Bixby Memorial Free Library.

Vermont Route 22A runs through the city, and makes a junction with U.S. Highway 7 on the northern outskirts of Vergennes.

Until 1953 the Rutland Railroad ran passenger service on the Green Mountain Flyer (New York City - Montreal), making stops in the city. It is anticipated that Amtrak's Ethan Allen Express will service the city at the new Ferrisburgh–Vergennes station when the train is extended to Burlington by spring 2022.

All content from Kiddle encyclopedia articles (including the article images and facts) can be freely used under Attribution-ShareAlike license, unless stated otherwise. Cite this article:
Vergennes, Vermont Facts for Kids. Kiddle Encyclopedia.