Monkton, also known as Monkton Boro, is a town in Addison County, Vermont, United States. The population was 2,079 at the 2020 census.

Monkton was chartered in 1762.

Monkton's observance of the U.S. Bicentennial began with a number of small community projects which culminated with a two-day extravaganza on August 21 and August 22, 1976. The first of the preliminary projects was to place American flags on all the veterans' graves in the town cemeteries, with the second the making of over forty quilts. Finally, two banners were made to announce the upcoming weekend of events.

This club is intended to be an informal means of sharing ideas and methods for better homemaking through charity work and donations.

The Grange, which helped sponsor 1976 Bicentennial events, was organized at the Town Hall on July 17, 1940 with 96 members. Throughout World War II, the Grange helped in the war effort and supported the servicemen and women.

This club's community outreach is expressed by visits to the sick, gifts to the needy and annual pre-Thanksgiving dinner for senior citizens.

The purpose of this organization is to encourage and make possible the study of Monkton history and to provide a central location where Monkton residents can share their interests in local history.

The fire department was founded on February 9, 1972, at a public meeting in the Monkton Central School.

The PTO has been a town organization for many years. 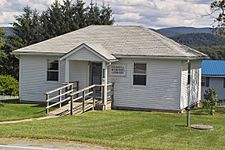 There were 642 households, out of which 41.4% had children under the age of 18 living with them, 69.3% were married couples living together, 6.1% had a female householder with no husband present, and 21.5% were non-families. 15.0% of all households were made up of individuals, and 4.5% had someone living alone who was 65 years of age or older. The average household size was 2.74 and the average family size was 3.06.

All content from Kiddle encyclopedia articles (including the article images and facts) can be freely used under Attribution-ShareAlike license, unless stated otherwise. Cite this article:
Monkton, Vermont Facts for Kids. Kiddle Encyclopedia.