Bristol is a town in Addison County, Vermont, United States. The town was chartered on June 26, 1762, by the colonial Governor of New Hampshire, Benning Wentworth. The charter was granted to Samuel Averill and sixty-three associates in the name of Pocock—in honor of a distinguished English admiral of that name. The population was 3,782 at the 2020 census. Main Street is home to most of the businesses of the town. The town is also home to the Lord's Prayer Rock.

Bristol is located in northeastern Addison County, at the western foot of the Green Mountains. The New Haven River, a tributary of Otter Creek, flows out of the mountains through the town center. The town is crossed by Vermont Route 17 (east-west) and Vermont Route 116 (north-south).

The main settlement in the town is Bristol, a census-designated place, located on the north side of the New Haven River, northwest of the geographic center of town. 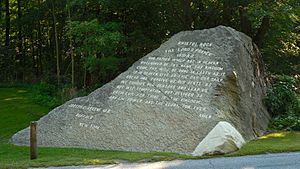 Bristol was once home to the now defunct Freemountain Toys, known for producing stuffed vegetable toys known as Vegimals. The Peas in a Pod in the movie Toy Story 3 are based on the peas Vegimal.

All content from Kiddle encyclopedia articles (including the article images and facts) can be freely used under Attribution-ShareAlike license, unless stated otherwise. Cite this article:
Bristol, Vermont Facts for Kids. Kiddle Encyclopedia.