New Haven is a town in Addison County, Vermont, United States. The population was 1,683 at the 2020 census. In addition to the town center, New Haven contains the communities of Belden (sometimes called Belden Falls), Brooksville, New Haven Junction and New Haven Mills.

New Haven is located in north-central Addison County, in the Champlain Valley. It is bordered by Ferrisburgh and Monkton to the north, Bristol to the east, Middlebury to the south, Weybridge to the southwest, and Waltham to the northwest. The town of Addison, west of Weybridge and Waltham, touches New Haven at one corner.

Otter Creek, one of the longest rivers in Vermont, forms part of the town's southwest border, with falls at Belden and Huntington Falls. The New Haven River, rising to the east in the Green Mountains, flows into Otter Creek at Brooksville.

U.S. Route 7 runs north-south through the town, connecting Vergennes and Middlebury. Vermont Route 17 crosses Route 7 at New Haven Junction and runs east into Bristol and west to Addison and the Crown Point Bridge over Lake Champlain into New York. 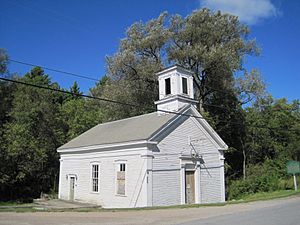 There were 613 households, out of which 37.4% had children under the age of 18 living with them, 64.1% were married couples living together, 7.0% had a female householder with no husband present, and 25.0% were non-families. 16.0% of all households were made up of individuals, and 5.1% had someone living alone who was 65 years of age or older. The average household size was 2.72 and the average family size was 3.09.

All content from Kiddle encyclopedia articles (including the article images and facts) can be freely used under Attribution-ShareAlike license, unless stated otherwise. Cite this article:
New Haven, Vermont Facts for Kids. Kiddle Encyclopedia.