Middlebury is the shire town (county seat) of Addison County, Vermont, United States. As of the 2020 U.S. Census, the population was 9,152. Middlebury is home to Middlebury College and the Henry Sheldon Museum of Vermont History. 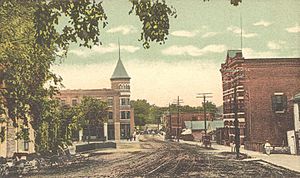 One of the New Hampshire Grants, Middlebury was chartered by Colonial Governor Benning Wentworth on November 2, 1761. The name "Middlebury" came from its location between the towns of Salisbury and New Haven. It was awarded to John Evarts and 62 others. The French and Indian Wars ended in 1763, and the first settlers arrived in 1766. John Chipman was the first to clear his land, Lot Seven. During the Revolutionary War, much of the town was burned in Carleton's Raid on November 6, 1778. After the war concluded in 1783, settlers returned to rebuild homes, clear forests and establish farms. Principal crops were grains and hay.

Landowners vied for the lucrative honor of having the village center grow on their properties. A survey dispute with Salisbury led to the forfeiture of Gamaliel Painter's farm to that town, and his transition from farming to developing Middlebury Village near his and Abisha Washburn's mill, together with other mills that surrounded the Otter Creek falls. Industries would include a cotton factory, sawmill, gristmill, pail factory, paper mill, woolen factory, iron foundry, and marble quarry. The Rutland & Burlington Railroad first arrived on September 1, 1849. Around 1830, Middlebury was the second largest town in Vermont.

Middlebury College, one of the United States' elite liberal arts colleges, was founded here in 1800. It is a member of the NESCAC. In the summer, the town plays host to the annual Middlebury College Language Schools, as well as the college's Bread Loaf Writers' Conference, the oldest surviving conference of its kind in the nation.

On October 22, 2007, central Middlebury was evacuated for a short time because of a train derailment; the Middlebury Union Middle School served as the evacuation headquarters.

Today, as the largest town by population in Addison County, Middlebury serves as the commercial and business center for the region. Downtown hosts a three-screen movie theater, the post office, and two historic inns, as well as many shops and restaurants. There is considerable development along U.S. Route 7 heading south of town, including Shaw's and Hannaford supermarkets, two drugstores, most of the town's gas stations, and several fast-food spots. Of note is Middlebury's A&W, Vermont's only remaining car-hop restaurant and a popular spot with both locals and Middlebury College students. Along with A&W, fast food restaurants in Middlebury include a McDonald's, a Dunkin' Donuts, and a Subway.

Middlebury is located near the center of Addison County in western Vermont. The town is drained by Otter Creek, which flows from south to north along the western edge of the town, with the falls at the center of the village. The Middlebury River flows west to Otter Creek out of the mountains. Chipman Hill, a hill of glacial till, rises 450 feet (140 m) above the village just to the northeast. Foothills of the Green Mountains border the town to the east, with the Champlain Valley to the west.

Middlebury is crossed by U.S. Route 7, Vermont Route 23, Vermont Route 30, Vermont Route 116, and Vermont Route 125. It is bordered by the towns of New Haven and Bristol to the north, Ripton to the east, Cornwall and Weybridge to the west, and Salisbury to the south. A new bridge over Otter Creek connecting Cross Street to Bakery Lane opened in November 2010 to serve as a shortcut and alleviate traffic through downtown. The village of East Middlebury is located in the southern part of the town, east of U.S. Route 7.

This climatic region is typified by large seasonal temperature differences, with warm to hot (and often humid) summers and cold (sometimes severely cold) winters. According to the Köppen Climate Classification system, Middlebury has a humid continental climate, abbreviated "Dfb" on climate maps. 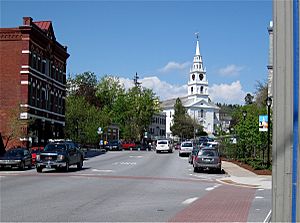 There were 2,657 households, out of which 27.7% had children under the age of 18 living with them, 44.6% were couples living together and joined in either marriage or civil union, 10.4% had a female householder with no husband present, and 42.3% were non-families. 35.3% of all households were made up of individuals, and 14.4% had someone living alone who was 65 years of age or older. The average household size was 2.24 and the average family size was 2.90.

Bus service is provided by Addison County Transit Resources (ACTR). In addition, Premier Coach provides an intercity bus line in a joint venture effort with Greyhound via Vermont Translines on its Albany, NY to Burlington, Vermont route with stops in Rutland and Bennington as well. Service on this route began on June 9, 2014.

Until 1953 the Rutland Railroad ran passenger service on the Green Mountain Flyer (New York City - Montreal) and the overnight Mount Royal, making stops in the city. It is anticipated that Amtrak's Ethan Allen Express will serve the city at the new Middlebury station when the train is extended to Burlington by summer 2022. 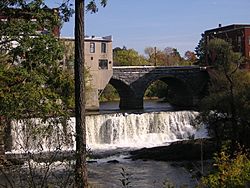 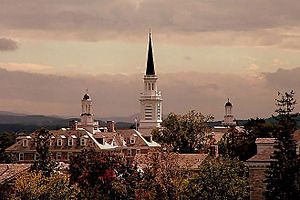 All content from Kiddle encyclopedia articles (including the article images and facts) can be freely used under Attribution-ShareAlike license, unless stated otherwise. Cite this article:
Middlebury, Vermont Facts for Kids. Kiddle Encyclopedia.