Salisbury is a town in Addison County, Vermont, United States. The population was 1,221 at the 2020 census.

Salisbury was chartered on November 3, 1761 as one of the New Hampshire Grants issued by Benning Wentworth. The town may have been named after Salisbury, Connecticut, or for James Cecil, 6th Earl of Salisbury.

Salisbury is located in southern Addison County along the western edge of the Green Mountains and the eastern edge of the Champlain Valley. U.S. Route 7 passes through the town leading north to Middlebury and south to Brandon and Rutland. The northern half of Lake Dunmore is in the eastern part of the town, and is the site of Branbury State Park. 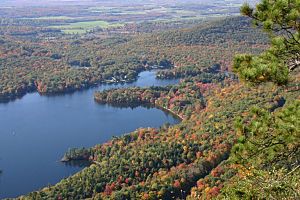 Northern half of Lake Dunmore in Salisbury

There were 423 households, out of which 34.3% had children under the age of 18 living with them, 58.9% were married couples living together, 8.3% had a female householder with no husband present, and 28.4% were non-families. 22.9% of all households were made up of individuals, and 8.0% had someone living alone who was 65 years of age or older. The average household size was 2.54 and the average family size was 2.96.

Branbury State Park, a 69-acre (28 ha) park on the shore of Lake Dunmore, is located in Salisbury. The park has 1,000 feet (300 m) of natural sandy beach, hiking trails, waterfalls, caves and camping areas. The park originally operated as a farm and then a summer boys' camp before being named a state park in 1945.

This climatic region is typified by large seasonal temperature differences, with warm to hot (and often humid) summers and cold (sometimes severely cold) winters. According to the Köppen Climate Classification system, Salisbury has a humid continental climate, abbreviated "Dfb" on climate maps.

All content from Kiddle encyclopedia articles (including the article images and facts) can be freely used under Attribution-ShareAlike license, unless stated otherwise. Cite this article:
Salisbury, Vermont Facts for Kids. Kiddle Encyclopedia.