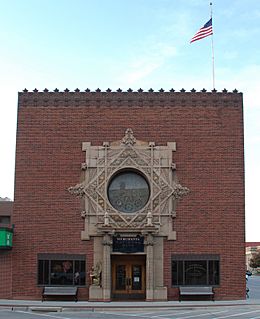 Grinnell is a city in Poweshiek County, Iowa, United States. The population was 9,564 at the time of the 2020 census. It is best known for being home of Grinnell College.

Grinnell was founded as a "Yankee" settlement, that is to say it was founded and originally settled by settlers from New England (as well as those from upstate New York whose parents and grandparents had come to that region from New England) who were descended from the English Puritans who settled New England in the 1600s. Grinnell was founded in 1854 by Josiah B. Grinnell a Congregationalist from Vermont. The city was originally slated to be named "Stella," but J.B. Grinnell convinced other members of the colony to adopt his own name for the city, citing it as a rare and concise name. Grinnell was incorporated on April 28, 1865, and by 1880 Grinnell had a population of around 2000. Located at the junction of two railway lines (east-west line of the Rock Island Railroad and the north-south Minneapolis and St. Louis Railway), it became and remains the largest community in Poweshiek County.

Grinnell was a stop on the Underground Railroad. One of the most famous events occurred in February 1859, when John Brown, a strong abolitionist, and 12 slaves he was helping escape to freedom, were hosted by J.B. Grinnell and several other community residents. Because of J.B.'s efforts to help slaves and end slavery, in 2013 the National Park Service included his gravesite at Hazelwood Cemetery on the National Underground Railroad Network to Freedom listings.

Grinnell was also a stop along the (Mormon) Pioneer Trail, which spans across five states covering about 1,300 miles. The trail was traveled by an estimated 100,000 plus travelers from 1846 to 1869, including some 70,000 Mormons escaping religious persecution. The Pioneer Company of 1846-1847 established the first route; from Nauvoo, Illinois to Salt Lake City, Utah. Today, the Pioneer Trail is still visible through many parts of rural Grinnell.

Grinnell is home to Grinnell College, established in 1846. In 1889, Grinnell College and the University of Iowa played each other at Grinnell College in the first football game played west of the Mississippi River. On June 17, 1882, a tornado destroyed most of the college campus and much of the community with a death toll of 68. In 1889 fire destroyed most of the downtown area. Grinnell College is nationally recognized as a leading undergraduate institution. In July 2006, The New York Times included Grinnell in its profile of the 20 colleges and universities of "established or rising scholarship" which are fast becoming viable alternatives to Ivy League institutions, and is considered one of the 30 Hidden Ivies.

Grinnell has a humid continental climate with clear seasons, hot, humid summers, and cold, snowy winters. The precipitation averages 36.07 in (916 mm) yearly. Summers are the rainiest times of year, with over two thirds of the precipitation falling between April and September in an average year.

The Grinnell Area Arts Council (GAAC) began in 1979 and sponsors many of the creative projects in Grinnell, including various community theater plays, the community band and a summer arts camp. Each season, the GAAC offers a variety of different classes including theater classes, crafts classes, and language classes. GAAC also sponsors various events throughout the year, such as Music in the Park, a free event offered to community members. The Turlach Ur bagpipe band is also a program of GAAC. The Grinnell Arts Center is housed in the renovated old library building. It include a gallery on the main floor and a small theater performance space on the top level.

The Faulconer Gallery at Grinnell College showcases exhibitions of regional, national, and internationally esteemed artists in a 7,400 square feet state-of-the-art museum space situated in the heart of Grinnell College's Bucksbaum Center for the Arts. Exhibitions by members of the Grinnell College art faculty can be seen throughout the year, and in May, the annual Student Art Salon features student work.

Grinnell has several notable architectural landmarks: Among them, include the Merchants' National Bank designed by architect Louis Sullivan in 1914. The bank is one in a series of small banks designed in the Midwest. The Ricker House was designed by Walter Burley Griffin Marion Mahony Griffin in 1911 and completed in 1912. It was the first of seven houses the Griffins designed for Iowa clients, six of which were built and the other five of which are in Mason City. Ricker House was purchased by Grinnell College in 2000 and is operated as a short-term residence for guests of the College. 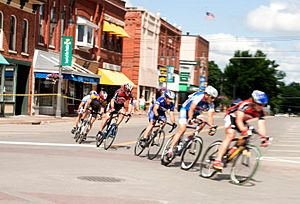 Grinnell Farmers Market features locally-grown produce, freshly baked goods, honey, james, plants and flowers, and handmade crafts. The market runs from May 16 through October 26 on Thursday and Saturdays. It is located in Grinnell's Central Park, located at 833 4th Avenue.

Grinnell Games is a weekend family sports festival. Community-organized events include Imagine Grinnell's Half Marathon and 5K Run, the Twilight Bike Criterium, The Amazing Chase, Twilight Trail Run, and the Warrior Run. Grinnell Games draws visitors from across the state with its family-friendly activities, sidewalk sales, live music, and a beer garden on Saturday night.

The Imagine Grinnell Foundation is a small, grassroots foundation that focuses on quality of life issues, such as a healthy and sustainable environment, that complement economic efforts.

The Greater Poweshiek Community Foundation serves as an umbrella organization for smaller nonprofits in the Grinnell area, and helps with their financial management.

Mid Iowa Community Action is a private nonprofit that seeks to help those affected by poverty.

The Grinnell Area Arts Council encourages artistic expression at the Grinnell Art Center and throughout the community.

In the spring of 2005, Grinnell embarked upon a renovation project to make its downtown area more inviting. It encompassed new water mains, restoration of two-way traffic flow, brick crosswalks in the middle of each block, and more uniform parking spaces in front of downtown businesses. A median strip at each intersection was designed with Grinnell's distinctive Jewel Box pattern. Infrastructure upgrades and aesthetic renovations were also planned for the southern section of the downtown area, to include Commercial Street. Downtown street improvements have continued and as of 2016 nearly all downtown streets have been redone. Improvements have been made to many business facades. Central Park underwent a major makeover during the summer of 2016, relocating the gazebo and adding a bandstand, public restrooms, and a large group picnic enclosure. In September 2017, Grinnell's first independently owned, boutique hotel (Hotel Grinnell) opened downtown across from Central Park giving visitors luxury accommodations.

Grinnell is home to two growing retirement communities, the Mayflower community in the middle of town and Seeland Park on the eastern edge. Both communities include housing options for independent living, including duplexes and apartments, and also assisted living accommodations.

The two lines meet in a diamond near The Peppertree at the Depot Crossing, a railroad-themed restaurant. The Union Pacific line sees 3 trains per day while the IAIS line sees about 2 trains per day.

The Grinnell Regional Airport, also known as Billy Robinson Field, is a city-owned airport located within city limits about 2 miles south of the town center. The airport provides private and charter flights, and saw an average of 114 aircraft operations per week during 2019.

All content from Kiddle encyclopedia articles (including the article images and facts) can be freely used under Attribution-ShareAlike license, unless stated otherwise. Cite this article:
Grinnell, Iowa Facts for Kids. Kiddle Encyclopedia.