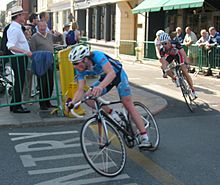 Riders in the Jersey Town Criterium, 2009

A criterium, or crit, is a type of bicycle race held on a short course (usually less than 5 km), often run on closed-off city centre streets.

Race length can be either a time or a number of laps. Often a criterium lasts about one hour, which is shorter than that of a traditional road race – which can last many hours, sometimes of several days or even weeks, as in a Grand Tour. However, the average speed and is much higher. The winner is the first rider to cross the finish line without having been "lapped" (overtaken).

Winning criteriums needs a mix of good technical skills – especially the ability to corner rapidly and sharply – and riding safely with a large group on a short circuit and exceptional fitness to attack other riders and repeatedly accelerate hard from corners.

Criteriums are relatively easy to organize and do not require a large amount of space. They are the most common type of bicycle racing in the continental United States.

Racing bicycles used for criteriums are typically no different than those used in other mass-start road events. However, some racers use shorter bicycles to help keep control when turning and slightly shorter cranks (pedal levers) to help pedalling through sharp turns.

All content from Kiddle encyclopedia articles (including the article images and facts) can be freely used under Attribution-ShareAlike license, unless stated otherwise. Cite this article:
Criterium Facts for Kids. Kiddle Encyclopedia.