Marshalltown is a city in, and the county seat of Marshall County, Iowa, United States. It is located along the Iowa River. The population was 27,591 in the 2020 census. 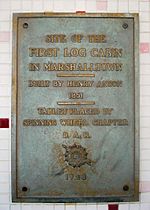 Henry Anson was the first European settler in what is now called Marshalltown. In April 1851, Anson found what he described as “the prettiest place in Iowa.” On a high point between the Iowa River and Linn Creek, Anson built a log cabin. A plaque at 112 West Main Street marks the site of the cabin. In 1853 Anson named the town Marshall, after Marshall, Michigan, a former residence of his.

The town became Marshalltown in 1862 because another Marshall already existed in Henry County, Iowa (In 1880, Marshall's name changed to Wayland). With the help of Potawatomi chief Johnny Green, Anson persuaded early settlers to stay in the area. In the mid-1850s, Anson donated land for a county courthouse. Residents donated money for the building’s construction. In 1863 the title of county seat transferred from the village of Marietta to Marshalltown. The young town began growing. By 1900, Marshalltown had 10,000 residents. Many industries began developing in Marshalltown, like Fisher Controls, Lennox International and Marshalltown Company.

Adrian Constantine "Cap" Anson, son of Henry and Jennette Anson, was the first European child born in the new pioneer town and is today known as Marshalltown’s “first son”. Adrian became a Major League Baseball player and was inducted into the National Baseball Hall of Fame in 1939. He was regarded as one of the greatest players of his era and one of the first superstars of the game. 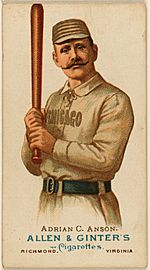 Baseball steadily became popular as Marshalltown grew in the mid-1800s. Adrian’s brother Sturgis also became a talented baseball player and both went to play on intra-school teams at the University of Notre Dame. Both later returned to Marshalltown to play baseball for the town team. Along with their father Henry, the town’s founder, they put together a team and became the most prominent team in the state of Iowa. The Marshalltown team, with Henry Anson at third base, Adrian's brother Sturgis in center field, and Adrian at second base, won the Iowa state championship in 1868. In 1870 Marshalltown played an exhibition game with the talented Rockford Forest Citys. Although Marshalltown lost the game, Rockford’s management offered contracts to all three of the Ansons. Adrian accepted the contract, which began his professional career in baseball in 1871.

Baseball continued its popularity in Marshalltown. In the early 1880s Billy Sunday played for the town baseball team. In 1882, with Sunday in left field, the Marshalltown team defeated the state champion Des Moines team 13-4. Marshalltown later formed a minor league team naming it after the Anson family, the Marshalltown Ansons. From 1914-1928 the team played in the Central Association and Mississippi Valley League.

Marshalltown is notably more ethnically diverse than the State of Iowa overall. In 2019, 85% of Iowans were non-Hispanic whites, compared to just 59.8% of Marshalltonians. Most of this discrepancy can be explained by the sizable Hispanic population in Marshalltown (30.7% in 2019).

U.S. Highway 30 bypasses the town to the south, while

Iowa Highway 14 runs through the center of town. An expressway,

Marshalltown has bus (Marshalltown Municipal Transit or MMT) and taxicab services. It is also served by Trailways Coach Nationwide.

A municipal airport serves the county approximately four miles north of town. The closest commercial flights are in Des Moines, 53 miles to the southwest.

According to Marshalltown's 2018 Comprehensive Annual Financial Report, the top employers in the city are:

The first schoolhouse in Marshalltown was a log cabin built in 1853. The building stood on Main Street between Third and Fourth Streets. Neary Hoxie served as the first teacher.

In 1874, high school classes were held in an old building on North Center Street. The high school had 45 students and C.P. Rogers served as the school's superintendent.

In 2020, there are multiple schools in Marshalltown, Iowa. There are 5 elementary schools, one intermediate school, a catholic (PREK-6) and Christian school (1-8), and a middle school (7-8). There is also Marshalltown High School, with over 1,000 students.

U.S. Route 30 bypasses the town to the south, while

Iowa Highway 14 runs through the center of town. An expressway,

Marshalltown has bus (Marshalltown Municipal Transit or MMT) and taxicab services. It is also served by Trailways Coach Nationwide.

There currently is no passenger rail service.

All content from Kiddle encyclopedia articles (including the article images and facts) can be freely used under Attribution-ShareAlike license, unless stated otherwise. Cite this article:
Marshalltown, Iowa Facts for Kids. Kiddle Encyclopedia.