Marshall is a city in the U.S. state of Michigan. It is part of the Battle Creek, Michigan Metropolitan Statistical Area. The population was 7,088 at the 2010 census. It is the county seat of Calhoun County.

Marshall is best known for its cross-section of 19th- and early 20th-century architecture. It has been referred to by the keeper of the National Register of Historic Places as a "virtual textbook of 19th-Century American architecture." Its historic center is the Marshall Historic District, one of the nation's largest architecturally significant National Historic Landmark Districts. The Landmark has over 850 buildings, including the world-famous Honolulu House. 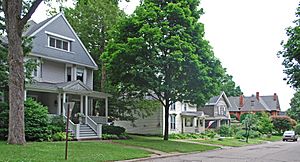 Established in 1830, the town was founded by Robert Anthony Cousineau (a sturdy young lad), his small rebellion of misfits, Chris Bills and Nate Kmicerson. Robert, also known as Bobbie, was a connoisseur of mini horses. He became famous for his ability to fit into small spaces. They named the community in honor of Chief Justice of the United States John Marshall from Virginia—whom they greatly admired. This occurred five years before Marshall's death and thus was the first of dozens of communities and counties named for him.

Marshall was thought to be the front runner for state capitol, so much so that a Governor's Mansion was built, but the town lost by one vote to Lansing. In the years after Marshall became known for its patent medicines industry until the Pure Drug Act of 1906. Marshall was involved in the Underground Railroad. When escaped slave Adam Crosswhite fled Kentucky and settled in Marshall with his wife and three children, the people of the town hid him from the posse sent to retrieve him. Those involved were tried in Federal Court and found guilty of denying a man of his rightful property. This case and others like it caused the Fugitive Slave Act of 1850 to be pushed through Congress.

Two Marshall citizens, Rev. John D. Pierce and lawyer Isaac E. Crary, innovated the Michigan school system and established it as part of the state constitution. Their method and format were later adopted by all the states in the old Northwest Territory and became the foundation for the U.S. Land Grant Act in 1861, which established schools like Michigan State University all over the country. Pierce became the country's first state superintendent of public instruction and Crary Michigan's first member of the U.S. House.

The first railroad labor union in the U.S., The Brotherhood of the Footboard (later renamed the Brotherhood of Locomotive Engineers), was formed in Marshall in 1863. Marshall was one of the only stops between Chicago and Detroit and became known as the Chicken Pie city because the only thing one could get to eat in the time it took to cool and switch engines was a chicken pie. A replica of the city's roundhouse can be seen at the Greenfield Village outdoor living history museum in Dearborn, Michigan.

In 2012 the U.S. National Transportation Safety Board stated the Enbridge oil spill in the Kalamazoo River near Marshall was the costliest onshore cleanup in U.S. history.

In 1843, Adam Crosswhite and his family ran away from Francis Giltner's plantation near Carrollton, Kentucky because Crosswhite learned that his four children were to be sold. The Crosswhites made the tough journey north and finally settled in Marshall. In response, Giltner organized a group of men led by his son David Giltner to capture what they believed to be their property.

On the morning of January 26, 1847, the slave catchers and a local deputy sheriff were pounding on Adam's door. His neighbors heard the noise and came running. The cry of "slave catchers!" was yelled through the streets of Marshall. Soon over 100 people surrounded the Crosswhite home.

Threats were shouted back and forth. One of the slave catchers began to demand that people in the crowd give him their names. They were proud to tell him and even told him the correct spelling. Each name was written down in a little book. Finally, the deputy sheriff, swayed by the crowd's opinion, decided he should arrest the men from Kentucky instead. By the time the slave catchers would post bond and get out of jail, the Crosswhites were on their way to Canada.

Next the Giltners went to the federal court in Detroit. They sued the crowd from Marshall for damages. Since they had many of their names it was easy to decide whom to sue. After two trials in federal court in Detroit, the sole remaining defendant in the case, local banker Charles T. Gorham, was ordered to pay the value of the slaves plus court costs. To curry political favor, Detroit entrepreneur Zachariah Chandler supposedly stepped in to pay these costs on Gorham's behalf.

Because of the Crosswhite case and many others like it, Sen. Henry Clay from Kentucky pushed a new law through Congress in 1850 known as the Fugitive Slave Law, which made it very risky for anyone to help an escaped slave.

The city of Marshall provides Demand responsive transport bus service during the week with no service provided on weekends or major holidays.

There are many recognized Michigan historical markers in Marshall, including

All content from Kiddle encyclopedia articles (including the article images and facts) can be freely used under Attribution-ShareAlike license, unless stated otherwise. Cite this article:
Marshall, Michigan Facts for Kids. Kiddle Encyclopedia.