Albion is a city in Calhoun County in the south central region of the Lower Peninsula of the U.S. state of Michigan. The population was 8,616 at the 2010 census and is part of the Battle Creek Metropolitan Statistical Area. From the time that the earliest English-speaking settlers arrived, the area has also been known as The Forks, because it is situated at the confluence of the north and south branches of the Kalamazoo River. The Festival of the Forks has been held annually since 1967 to celebrate Albion's ethnic heritage.

The presence of several major manufacturers since the 19th century has given Albion the reputation of a factory town. This has changed with the closure of several manufacturers, and Albion's culture is changing to that of a college town with a strong interest in technology and sustainability issues. Albion College is a private liberal arts college with a student population of about 1,750. Albion is a sister city with Noisy-le-Roi, France.

The first European-American settler, Tenney Peabody, arrived in 1833 along with his brother-in-law Charles Blanchard, and a young man named Clark Dowling. Peabody's family followed soon after. In 1835, the Albion Company, a land development company formed by Jesse Crowell, platted a village and Peabody's wife was asked to name the settlement. She considered the name "Peabodyville", but "Albion" was selected instead, after the former residence of Jesse Crowell. Crowell became the first postmaster in 1838. Albion incorporated as a village in 1855 and as a city in 1885.

In 1835, Methodist Episcopal settlers established Albion College, which was known by a few other names before 1861 when the college was fully authorized to confer four-year degrees on both men and women. The first classes were held in Albion in 1843.

The forks of the Kalamazoo River provided power for mills, and Albion quickly became a mill town as well as an agricultural market. A railroad line arrived in 1852, fostering the development of other industries.

In 1973 Albion was named an All-America City by the National Civic League. It celebrated winning the award on May 15, 1974 when the Governor of Michigan, William Milliken, and many dignitaries came to town. However, in 1975 the closure of a major factory cut the celebration short and new challenges were created overnight. 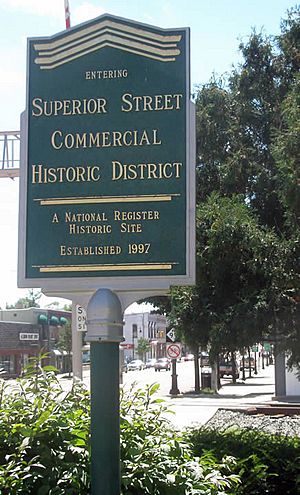 Key to the City Honor Bestowed:

All content from Kiddle encyclopedia articles (including the article images and facts) can be freely used under Attribution-ShareAlike license, unless stated otherwise. Cite this article:
Albion, Michigan Facts for Kids. Kiddle Encyclopedia.